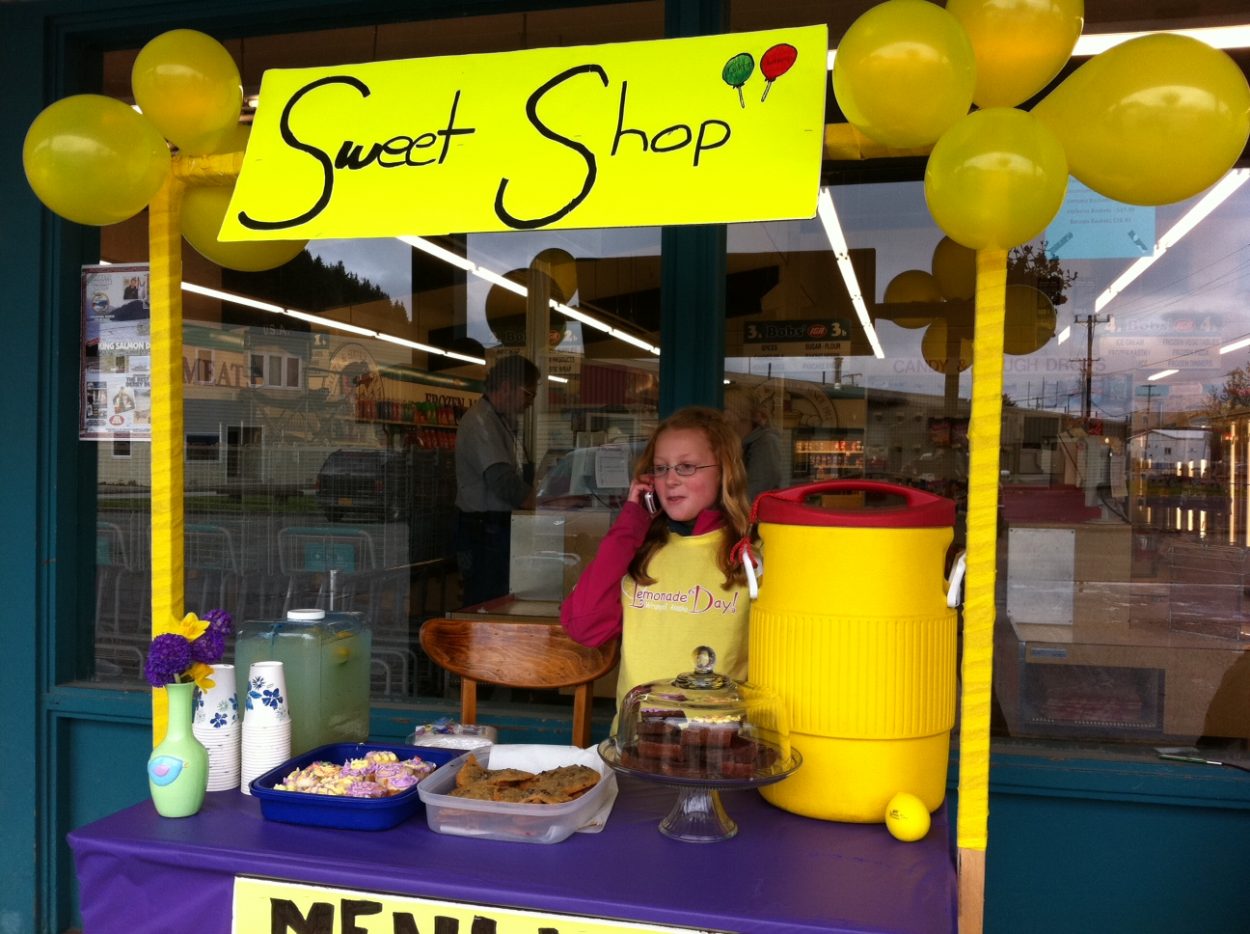 Wrangell is filled with small locally owned businesses that rely on community support. And the importance of that support was one lesson learned last weekend when young students opened their own lemonade stands around the city. Charlotte Duren follows one young student for Wrangell’s 1st annual Lemonade Day.

Early, Saturday morning, 11-year-old Helen Decker sets up shop outside one of Wrangell’s local groceries stores. Her business is called “Sweet Shop,” and it’s more than just your average lemonade stand. “I have limeade, lemonade, brownies, and the foods all homemade,” she says.

With help from her parents Gig and Julie, and her brother Sig, Helen spent the week before baking, making signs, and mixing batches of lemonade.

From just your basic table to more elaborate painted booths, Lemonade stands popped up all over town. ‘Lemonade Day’ is an annual national event that encourages business education among K-12 students.

Organized by the City and school district, each of the 15 students participating created a business plan, received a $50 loan, and chose a charity to donate a percentage of their profits to. And the rest, that was up to the business owner.

“I got some balloons, some streamers, lots of varieties of things to eat. I’m also handing out pencils that say lemonade day, just the little cute things that make people happy,” she says.

Helen’s mom Julie loaned her an extra $40 to help with some of the start-up costs.

“She’s been learning a lot and saying things like ‘it’s going to cost me that much to buy all my supplies?’ so all those little skills that go into running a business or running your household,” she says.  As for the loan, she’s not worried about getting paid back.

“I think we are going to figure out how much she sells, and if she can’t pay it back, maybe she will be paying it off in chores,” she says.

Juggling a camera and a few glasses of lemonade Wrangell’s Economic Development Director Carol Rushmore takes photos of all the stands. She says she hopes the event encourages future entrepreneurship in Wrangell.

“I think a lot of kids, especially in the rural communities will get jobs at a young age. And I think it’s very important for them to learn the difference between working for themselves and for somebody else,” she says.

“I think for Wrangell it’s particularly important because our downtown has not been taken over by the cruise industry like what you seen in many other southeast Alaska communities that are our size or larger. Our business owners still live in Wrangell and still own the businesses, so we would prefer to pass that tradition along to the youth in our community, so one day they can own businesses and stay in Wrangell,” he says.

Back at Helen’s Lemonade stand business is steady. Helen says she’s learning a lot, her cash box is over flowing with $1s, $5s, and $10s, and her friend Abby has joined her. She says lots of people have stopped by her booth.

“People, who came by the stand, would grab a glass of lemonade, and then tell people in the store that I was out here selling lemonade. Word travels fast and someone was telling people I had the best cupcakes, and then people are coming out and saying I want one,” she says. 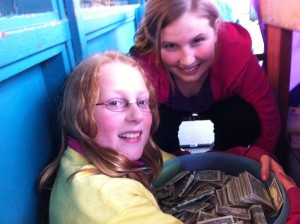 By 5 pm  Helen’s cooler of lemonade is nearly empty and her baked goods…sold out. Looking back at a day of sales, Helen calls lemonade day a success. Her goal for the day was to make $150.

But instead…she made $426. Helen plans on giving a percentage of her profits to the Ronald McDonald Foundation, to help kids battling long-term illnesses.