Members of Wrangell’s Native tribal council and the community recently gathered for a dedication and blessing ceremony for cedar wood house posts donated for the renovation of the city’s historic tribal house.

This renovation comes after structural engineers found significant water and wood rot damage to the main beams and posts of the more than 70-year-old clan house. Helping guide the ceremony, Jackson says it’s important that the wood is properly blessed.

“These poles were cut to fit the chief shake long house and we believe they still have a spirit. We needed to bless them because some of these corner posts are going to be carved and will tell the history of the shakes people. And we wanted to make sure we didn’t miss anything. And bless all those who took part in it, and where it is today,” he says.

The Wrangell Cooperative Association, the local tribal council, organized the event, which included local Native leaders, elders, singers and dancers. As part of the ceremony Jackson performed a ‘peace offering song’ to the cedar trees that were donated by the Sealaska Regional Native Corporation. 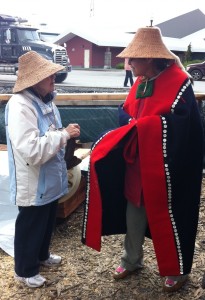 “It makes us really feel good that we can keep moving ahead on our project. And it feels good to carry out the tradition of thanking mother earth and the trees for their sacrifice for us. Because that’s what we are asking them to do and so this gives us strength to carry on and do more,” she says.

Cooperative Association Office Manager Carol Snoody says now that the posts are blessed, work can begin on reconstructing the tribal house. She says once the house is back up, they will move forward to phase two of the project, which is the construction of Wrangell’s first community carving shed.

“It will be a multi-purpose facility for the town’s people, not only the tribe. After that our plan is to repair, replicate and repaint our totems and get them back on the island,” she says.

Snoody says a re-dedication ceremony will be held for the completion of the renovated tribal house on Chief Shakes Island in the spring of 2013.