“Fort Wrangle [Wrangell],” showing a totem and part of the Tlingit village, circa 1886, photograph by Partridge. Courtesy Sealaska Heritage Foundation.

Did you know the United States Army and Stikine Tlingits fought a battle in Wrangell almost 150 years ago? If you didn’t, you’re not alone.

Tis Peterman has lived in Wrangell all her life. But until a few years ago, she’d never heard of the 1869 Battle of Wrangell.

“I happened to come across it when I did some research for the museum that was built here,” she says.

“And it was just this very little story. And I hadn’t heard from anybody else on it. And when I looked further it was just an interesting piece of Wrangell’s history that I’d never heard about before,” she says.

The cooperative association and the Sealaska Heritage Institute are combining efforts to research the conflict and somehow commemorate the event.

A $32,000 grant from the National Park Service’s American Battlefield Protection Program is funding the effort.

“The objective of the project is not only to understand the battle, but to understand where it occurred” says Zachary Jones, archivist and collection manager for the heritage institute, the cultural arm of Southeast’s regional Native corporation.

He says the research could allow for improvements to the site.

“Development could include naming it a national battlefield, development of the area for tourism, or just telling the story or perhaps even a memorial,” he says. 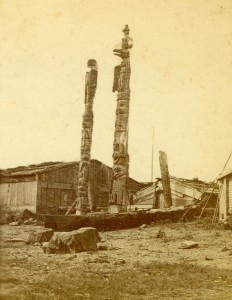 Jones says most of what’s known comes from a military report to Congress. (Click here to read the document. Go to page 153.)

That document says the conflict began at a gathering on Christmas night, 1869. One version says a Stikine Tlingit man bit a finger off a white woman who was part of the Army presence at Fort Wrangell.

“The conflict originated over a domestic dispute, which then escalated into a military mobilization,” he says.

That led to the death of two Stikine men and a white man. The military also bombarded the village.

“It was largely a two-day conflict which involved canon fire from the U.S. Army and small arms fire exchanges between the Tlingit and the Army,” he says.

The battle caught the attention of officials in Washington, D.C. There were hearings before Congress, and the Army did not come out well.

“This event happened during a period in American Indian policy when the federal government was trying to tone down violence, trying to stop the so-called Indian wars. So a very critical report was developed by a federal official about the conflict that condemned the actions of the U.S. Army. And this action contributed to a military drawdown in Alaska,” he says.

The Army also shelled the Tlingit village in Kake and other locations in 1869, not long after the U.S. took over Alaska from Russia. Jones says they were not coordinated attacks, but had similar origins.

“The Army was here trying to stamp out any aspects of Tlingit sovereignty. They used tactics of brutality that were very common during the Indian Wars period,” he says.

Other regional battles include the Navy’s bombardment of Angoon about 10 years later.

The grant award was announced earlier this month. Peterman of the Wrangell Cooperative Association hopes it expands knowledge of the conflict.

“I think this research from the particular grant will find out if there’s anybody who has passed down this story at all,” she says.

She also hopes the information gathered will better balance the written record.