George Washington had the final say in this week’s Special Election for the new Wrangell Medical Center Board. After counting all of the absentee ballots, including the five sent by fax, two candidates were tied for the third seat of the term expiring this October. Both Bob Henry and Barbara Conine had 290 votes. In accordance with city ordinance, both candidates were called down to city hall for a coin toss to determine the winner. They arrived in jovial, joking moods. 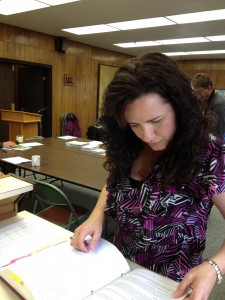 Conine called tails, but the quarter landed heads side up. Borough Clerk Kim Flores called the election in favor of Bob Henry. Assembly member Bill Privett said it’s only the second time in Wrangell’s history that the election came down to a coin toss.

Conine said she will run again for the seat when it comes up for re-election in October.

The canvassing board counted a total of 573 ballots. Final numbers place the following people on the board:

Judy Allen, Robert Henry, and Marlene Messmer for the term expiring this October

The board will be sworn in during a special meeting on Wednesday at 5:30 pm in the council chambers at City Hall.