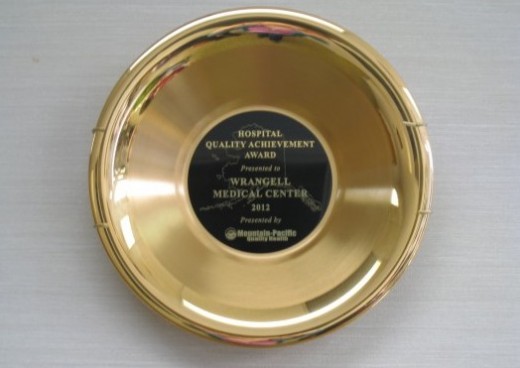 The Wrangell Medical Center has received an award for providing quality care to patients. 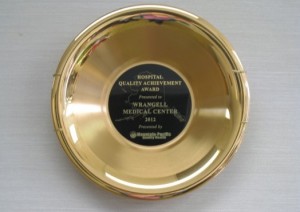 The Gold Pan Quality Achievement Award is on display in the hospital’s main lobby.

“What we report and abstract out is anybody who is admitted to our facility with congestive heart failure, pneumonia or heart attack, there are certain elements that they collect on those stays to make sure that we meet a standard of care,” she said.

She said anyone over the age of 18 who is admitted with any of those symptoms is included. Acting-Interim CEO Barb Bigelow said the award shows the hospital provides safe and effective care to its patients.

“I think, especially, for a facility the size of Wrangell it tells all of its patients and consumers that this hospital has achieved a great quality score, and that the care they receive is going to be good care here. It’s every bit as good as they might get, for example, at a hospital in Seattle,” Bigelow said. 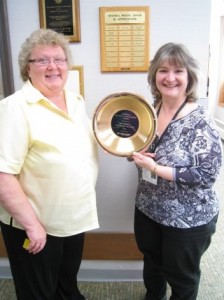 CFO Olinda White and Health Information Management Director Cathy Gross were involved in capturing the honor for the hospital.

She said the hospital voluntarily submits the reports as a way to hold itself accountable. CFO Olinda White said taking part in the reporting process also translates into more team work.

The Wrangell Medical Center is classified as a critical access hospital because it has 25 beds or less. White said so far there is no additional money or reimbursement tied to the high scores, but that is something the hospital would like to see. Bigelow said some of the larger hospitals are seeing incentives for their quality, which she said is known as “pay for performance.”

“Often times the smaller hospitals have a more difficult time, due to resources, to achieve a high, consistent level of quality. Although, my experience with critical access hospitals is we often do a better job of it,” she said.

The hospital plans to begin tracking certain out-patient cases for the program as well. Those include strokes, chest pain and heart attacks. The other three hospitals that received the quality award were Central Peninsula in Soldotna, Mat-Su Regional in Palmer and Norton Sound Regional in Nome.