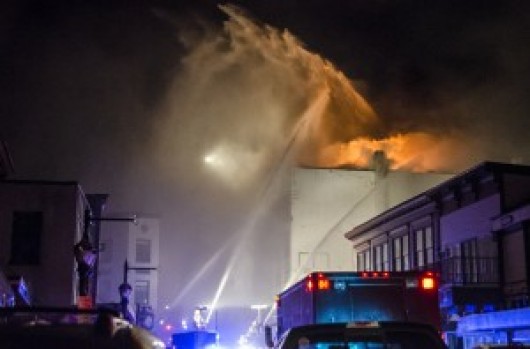 The Gastineau Apartments fire started on the fourth floor and spread rapidly. The Monday evening blaze injured two, not seriously, but officials said all residents made it out. KTOO Photo.

Division Chief Brian Long said the initial report of a fire came in about 5 p.m. He estimated between 50 and 60 firefighters responded and were still on the scene at 10 p.m.

“The fire started on the fourth floor, spread rapidly, smoke pressed through all floors of the structure,” said Long. “We did not get all clears on any searches yet, we don’t know the status of all the victims inside, and we’ve had one civilian and one firefighter transported to the hospital for injuries.”

Long said many of the firefighters would remain on-scene through this morning to continue dousing hot spots. The area was closed to traffic Monday evening, but has since been opened up.

He said the two confirmed injuries were non-life threatening. But he was unable to say if there were more serious injuries or people stuck inside while the building burned. He said that would have to wait until the flames were completely doused and firefighters were able to safely enter the structure.

“We’ve got to wait until the fire is completely out. Then we have to drain all the water from the building,” Long said. “There’s three feet of standing water on every floor up there. So we’ve got to drain all the water out of the structure, make sure it’s safe to enter, and then we’ll have to search every room and make sure that there’s no victims.”

James Barrett owns the Gastineau Apartments. He said as far as he knows all tenants were able to make it to safety.

“My understanding is everybody is accounted for and taken care of,” Barrett said.

He was one of hundreds of people who gathered on South Franklin and Front Streets to watch as huge orange flames and black smoke billowed out of the building. He called the fire “devastating.”

“I’ve spent years working on this building and trying to renovate it and make it a nice place for people to live,” Barrett said. “So yeah, it’s absolutely devastating.”

Barrett, who also owns the Bergman Hotel, said he was offering free rooms there for residents displaced by the fire.

“There’s drinks there and cots there and blankets there and people there to take care of them,” Mattice said. “We’re just making sure everybody downtown’s got a place to be for the night.”

Mattice said the fire didn’t appear to spread to any other structures, but some nearby buildings including the Baranof Hotel were evacuated due to heavy smoke.

Alaska Electric Light and Power also shut off electricity throughout much of downtown Juneau while firefighters battled the blaze.

Mattice said he’d have to wait until today to figure out how many people were displaced.
“The Centennial Hall numbers are really low compared to the numbers we assume are displaced,” said Mattice at about 9:30 last night. “But people find friends and they’re still watching the fire.”

Gastineau Apartments resident Noel Koppisch left the building with his dog Abby right after the fire started. He talked with Red Cross volunteers at Centennial Hall before deciding to take a room at the Bergman.

“They told us to get out, we were on the second floor, so we left,” Koppisch said. “She’s a Great Dane. If she’s not with daddy, she freaks out. She’s definitely a daddy’s girl. I go where she goes. Obviously I lost everything but I have her, and that’s all that matters. I talked to one of the firefighters and yeah, it’s gone.”

Caleb Smith lived on the third floor of the apartment building. He said police officers alerted residents to the fire at about 5 p.m.

“I was actually asleep, my dad came and opened my door and said ‘wake up, we got to go,’” Smith said. “And then, as soon as I came out of my room I seen the cops, running back and forth in the hallway, pretty much ran out of the house right then, didn’t really have time to grab anything right then and there.”

Barrett, the owner of the Gastineau Apartments, reported that an unattended candle was the cause of the fire. However, that hasn’t been confirmed by fire officials.

Barrett said the property is insured.

Brian Long with Capital City Fire and Rescue did not know the extent of the damage, but said it would be significant. He said an investigation was already underway last night, but fire officials would have to tour the building before determining the exact cause.