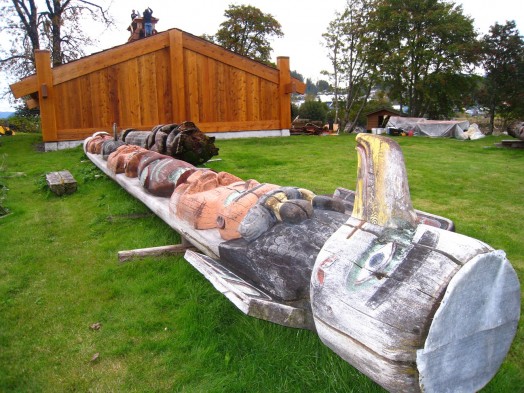 Preparations continue for next year’s re-dedication of Chief Shakes Tribal House, but the people in charge of the event have hit a snag: making sure there’s enough housing.

Every room in the eight hotels, B&Bs or lodges in Wrangell is booked for the celebration set for May 3 and 4. That is still about six months away. As of right now the Wrangell Cooperative Association, which is spearheading planning for the event, expects more than 700 people to attend. But WCA’s Tis Peterman said those are mainly dancers. She said the number of possible attendees continues to climb as word of the event spreads.

“I have a friend that works at Sealaska, and a story about this went statewide that KSTK did and Wrangell was the talk of the floor at Sealaska the next morning. And then following that story, a local B&B owner calls me up and she said ‘What happened this week?’ She said ‘My phone has been ringing off the hook all day long’,” she said.

“We did have a letter requesting a ferry to be docked here for housing during the re-dedication to the Governor and to the head of the Alaska Marine Highway. They were denied,” Peterman said.

She said the request was denied due to issues with liability, a lack of precedence and scheduling conflicts. Captain Mike Neussl is the deputy commissioner for marine operations with the Alaska Department of Transportation. He said even though a ferry was docked during a Southeast Conference in Wrangell several years ago, that does not mean it should become a trend.

“There are a lot of communities that would potentially request such a service and we, based on the schedule, cannot meet all those, and actually don’t want to be in the position deciding who gets such a hotel ship and who doesn’t if a precedent is set that we do that,” he said.

Neussl said another concern would have been competition with local businesses.

“A lot of questions arise, like what would we charge for a night on the hotel ship? What’s a room worth on a hotel ship as opposed to a room in town? Do we try to figure out the going rate and charge that or less or more,” he said.

Now the WCA office is seeking help from the community. Peterman said they have received about 20 responses so far.

Peterman said she is hopeful the community will come together to ensure all visitors have a place to lay their head. For now, the office is looking for anyone with spare rooms, apartments or even RVs for rent.

This is the Chief Shakes Tribal House as of September 25. Construction is still underway.