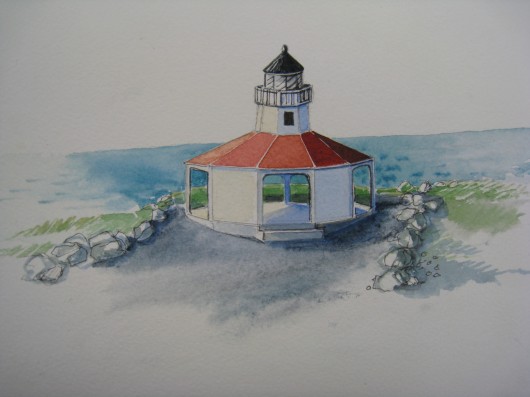 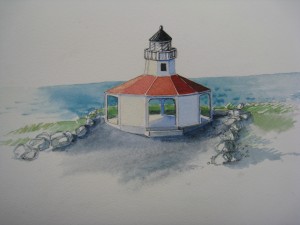 Wrangell’s Port Commissioners are hoping to construct a lighthouse for the Mariners’ Memorial intended for Heritage Harbor.

Harbor Master Greg Meissner said he plans to start talking to engineers to get a cost estimate.

“We’re thinking of putting up concrete walls, metal roof. We want something that’s durable and looks authentic and is low maintenance. We’re trying to keep things concrete and metal and we’re not going to monkey with it,” he said.

He said the estimates will be based on an artist rendition, which was designed by Brenda Schwartz-Yeager. The lighthouse will be the main component and the most expensive part of the project. Meissner said he will be working with landscape architects as well for the final design.

Newly-elected Port Commission Chair Brennon Eagle mentioned the need for functional lighting. Meissner said that will be part of the estimate.

“The architects or engineers who draw this kind of stuff probably have ideas of their own: ‘lighting would look something like this and probably cost about this much.’ And they’d throw it in the mix. And we always ask them to think really fat when we’re looking at money so by the time we get to some of these things, the dollar amounts we come up with three years later just don’t cover the bills,” he said.

Eagle said the borough will likely use grant funding to pay for the project. He said officials will be looking for opportunities while the commission continues making design decisions.

“There’s been some other concepts floated around for interior lighting. Maybe some type of sculpture-type thing on the ceiling. Maybe a compass rose on the floor. There’s different things still kind of floating around that are going to be addressed before we start building on something like this. But we need to start looking for funding, too,” he said.

Commissioners also are still working out how the names of people lost at sea will be displayed. Meissner and the commissioners mentioned they would prefer not to need a stonemason or other craftsmen. They said that would increase the initial price tag as well as the subsequent costs as more names are added. Commissioners also want to use local designs and talents when putting this project together.