According to action taken during Tuesday night’s regular assembly meeting, Wrangell Borough officials have directed the city’s Southeast Alaska Power Agency board members to develop a long-term plan for the operations and maintenance of the hydro-electric power plants at Swan Lake and Tyee Lake.

Assembly members once again discussed the SEAPA-commissioned D. Hittle and Associates report during their meeting. The document recommends a single operations and maintenance contractor for the power plants as a way to save money and keep costs down in the future. The report drew the ire of many community members and government officials in Wrangell, Petersburg and Ketchikan when it was first put forward. 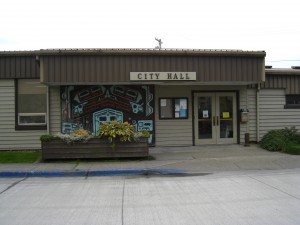 Mayor Don McConachie requested the borough assembly give some direction to the Wrangell SEAPA board members regarding the report and pushed for a cautious approach.

“I think we need to slow down. We need to look exactly at what we are doing. And we need to get the fear out of this particular motion and report,” he said.

Initially, Assembly Member James Stough made a motion to advise Wrangell’s SEAPA contingent to vote down the recommendations. One of the main complaints from assembly members on Tuesday was that SEAPA only had a report with suggestions, not a clear proposal for how to move forward.

SEAPA CEO Trey Acteson mentioned the agency held off on a detailed proposal because of the costs associated with making those plans. He wanted approval from the board first.

“If our board doesn’t vote to go to a single operator, then why spend an extra $100,000 or $200,000 to put together a whole detailed report with all the components to renegotiate the union contracts, and all the other pieces that fall in there? Why would you do that and spend all that effort and potential money? And I was just throwing out random costs because I don’t know how much that costs at this point, but it’s certainly going to cost some additional funding. And that’s why that was not taken to the next step,” he said.

Acteson said he would like to do an initial training-needs assessment and staff the projects with workers who have diversified skills. Even so, Vice Mayor Bill Privett said he thinks SEAPA is moving too quickly with this proposal to go to single contract.

“There’s multiple unions involved, there’s PERS involved. We’re already had a report on that from our finance director and I think we have to be very careful about that. I think that at some point in the future, whether that two, or three or five years, this community and Petersburg and Ketchikan would be well served by a single operator at the SEAPA sites. But, it’s going to take a while and it’s going to take several years,” he said.

He said he isn’t necessarily against the single contractor idea, but if it is approved he would like to see existing Thomas Bay Power Authority employees have first crack at any jobs that are available. With regard to the unions, SEAPA Operations Manager Steve Henson said the agency has looked into the issue as well as the Public Employees Retirement System, or PERS.

“Yeah, it’s the same union with two different contracts. They just need to be melded together. And there’s differences in pay, there’s differences in benefits between the two plans. All of that has to be worked out and that’s all through negotiations at the table. As far as PERS retirement, we have checked with the state and we can do PERS. So the people at Tyee can retain their PERS and we could, as new people are hired on, as they retired and left then we could do something to change that,” he said.

Henson reiterated the report is only full of recommendations, and it’s not necessarily a road map for SEAPA’s future plans. Another recommendation contained in the document suggests SEAPA move toward a work schedule that would put a lone operator at remote sites.

“In my opinion, even under the single-operator scenario, I would not expect to see an extreme change in staffing levels. Given the remote setting of the projects and reliance on weather for travel, from a safety and security standpoint I would not be in support of anything less than two operators on site at any given time,” he wrote.

Acteson has said in the past that having a single operator on site is a common practice throughout the industry. After about 50 minutes of discussion, Vice Mayor Privett put forward a new motion.

“I would move to instruct the Wrangell SEAPA board members to develop a long-term work plan that will begin to evaluate a new operations and maintenance agreement and to review the municipal concerns and keep them on board,” he said.

The Wrangell Borough Assembly is holding a special meeting Nov. 30 at 4 p.m. Members will be meeting to clarify action taken during their regular meeting Tuesday night. The SEAPA board has its next meeting December 11th where they will discuss the report further.