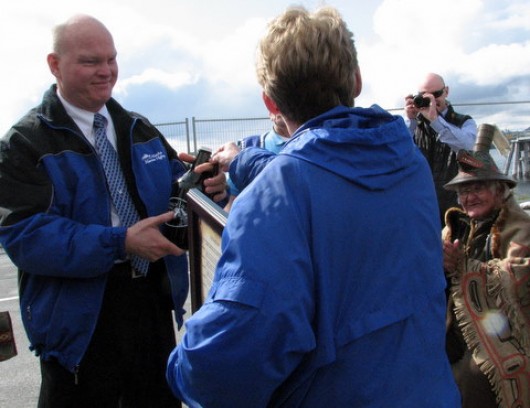 Ferry Chief Mike Neussl helps celebrate the resumption of Sitka-Angoon service at the Baranof Island city’s terminal in May, 2012. He leaves the job this week. Photo by Robert Woolsey/KCAW.

Southeast leaders were surprised by Captain Mike Neussl’s announcement that he would resign from his job as marine highways chief. But some say it won’t hurt the ferry system in the long term.

Neussl was hired as deputy commissioner for marine operations just a few weeks short of two years ago. The move came after the former helicopter pilot, engineer and manager retired from a 30-year Coast Guard career. (Hear a report from when Neussl was hired.)

Cathie Roemmich is on the state’s Marine Transportation Advisory Board, and is the Juneau Chamber of Commerce’s CEO.

“I’m saddened and disappointed in a way because I know Capt. Neussl put his whole heart in and did a fine job and had the respect not only of MTAB but the marine highway employees as well,” she says.

“I think we’re always sorry to lose the top guy at the helm for the marine highway system. But we have had a lot of turnover,” he says.

Neussl took over the job from Jim Beedle, a longtime ferry staffer who worked his way up through the ranks. He stayed about three years, the longest tenure in recent memory.

In all, five people have headed up the marine highway system over the past seven years.

“We’ve seen each one have their own personality and way of doing things, but they all left a mark as they passed through,” Venables says.

Neussl says he was not part of that decision-making process. But he did not say either change led to his departure.

“There’s been a lot of changes all at once. I think maybe, in the long run, they could be positive,” says Peggy Wilson, a Wrangell representative who chairs the House Transportation Committee.

“I’m really pleased with the new commissioner. I think at least with him, we will not have as many surprises,” she says.

Wilson is critical of former Transportation Commissioner Mark Luiken. She says he changed projects without notice and was not transparent enough in his decisions.

There’s no word on the hiring process for Neussl’s job, or how soon it will be filed.

But Venables is optimistic.

“The marine highway system has been running and is running very, very well and effectively. We’re glad for that and wish to help it continue,” he says.

“We can just hope there’s somebody out there that can take on this role with enthusiasm and the spirit to help continue to improve and look forward to a future that our marine highway can operate under,” she says.

The change of leadership and ferry-design plans will get some official attention later this month.

The Marine Transportation Advisory Board meets January 22nd in Juneau. And Representative Wilson says the House and Senate Transportation Committees will hold joint sessions once the Legislature resumes work.