Assembly in celebration of Native heritage 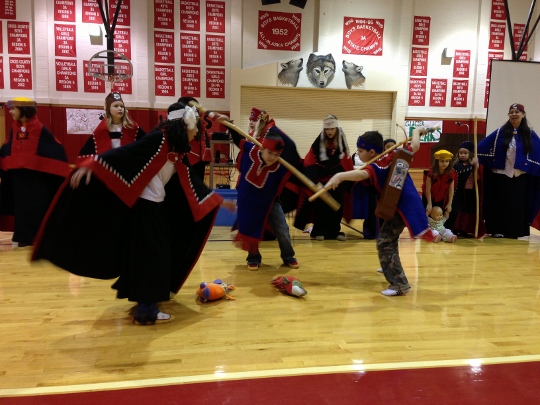 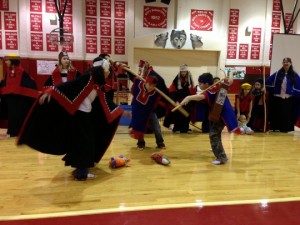 The morning’s event began with performances by the students of T/H Headstart and the JOM dancers. They performed a number of songs and dances, some old and some new- like the one celebrating civil rights leader Elizabeth Peratrovich.

Following that was a presentation by Lu Knapp. She outlined the progress of renovations on the Shakes Tribal House.

“It has been exciting for me to see how all of the barriers have been overcome and we were able to get this far this fast,” said Knapp.

But, she said, there is still a lot of work to be done.  She asked people in the audience to volunteer during the rededication and encouraged students to get community service hours helping out at the event.

She then introduced a video made in 2000 of students performing some of the same songs as part of a cultural awareness project.

“The Native culture was beautifully woven throughout the project and it is an excellent example of what can be done with culturally relevant lessons and teaching to the different learning styles of students,” said Knapp.

Superintendent Richard Rhodes was in the audience and said he thought the performance was important for a number of reasons.

“Well it’s always exciting to celebrate Native culture and to understand and recognize what that culture plays in our geographical area. Although this is only my second year in Alaska from California, I did grow up in a Native American community and so it’s important to understand and recognize those traditional values and the people that participate in that,” said Rhodes.

Rhodes said his favorite part was watching the kids perform.

“Our state legislator says culture is important and we need to make sure the kids understand that. So, I just want to make sure that those kids get recognized for the work that they’re doing and we’re really proud of our JOM dancers,” said Rhodes.

Virginia Oliver was there to lead the dancers. At the end of the performance, she told the audience that it’s especially important for the community to come together in the next few months.

“We hope that everybody can be involved in helping  with the rededication of the Shakes House. That’s coming May second and third. We have, like, 90 days left before about a thousand to fifteen-hundred people are coming into Wrangell. So this song here is called “Wooch.Een”, “Let’s Work Together,” said Oliver.