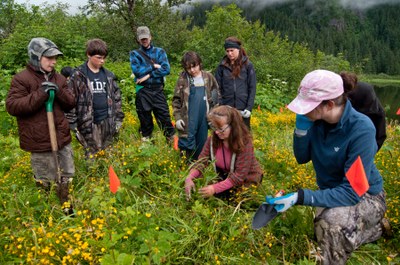 Wrangell’s Boy Scout Troop 40 traveled to Anchorage as part of a youth contingent to present at the Alaska Forum on the Environment.

Last summer, Wrangell’s Boy Scouts got wind of something smelly near Roosevelt Harbor on Zarembo Island. 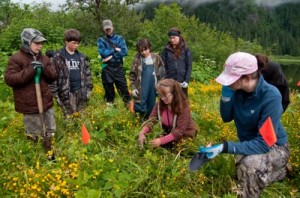 “I was over there with my husband and we were walking our dogs and we noticed how much trash there was, where it wasn’t even safe for the dogs to walk. And so I mentioned it to the boys, and they were like, hey, let’s go clean it up,” said Assistant Scoutmaster Kim Powell.

She said the Forest Service paid for the troop’s transportation to the island so the boys could get to work.

Seventh grader Caleb Groshong said it was a tough job right from the start.

“We went down there and we heard about all the garbage. And we went and cleaned up a lot of it. Because when people hunt up there they throw beer cans and nasty stuff in the road…cars and batteries we couldn’t pick up and tons of trash in the ditch,” said Groshong.

They spent the weekend picking through piles of bottles, beer cans, tires, cigarette butts, and abandoned vehicles. By the end of the trip they had cleaned up over 2000 pounds of garbage including 45 gallons of aluminum cans.

Seventh grader Tymon Teat said that’s why the Forest Service contacted the troop when they needed help with an environmental project at Twin Lakes.

“They thought we did really good at Roosevelt and everything. So they thought they can send us up there to help with the invasive weeds—to get those out like we did with the garbage,” said Teat.

The boys took a boat up the Stikine River to Twin Lakes where they worked alongside representatives from the Forest Service, the Southeast Alaska Conservation Council, and the Sitka Conservation Society.

They spent five days in the wilderness getting rid of invasive plants like dandelions, buttercups, and reed canarygrass.

Invasives are aggressive non-native plants that pose a threat to an area’s native species.

Glenn Smith, a father of one of the Scouts, went up as a chaperone. Smith said the trip gave him the opportunity to learn new things alongside the boys.

“It was kind of neat to go up there.  I had really no idea that the invasives were around. Everybody looks at dandelions that grow along the road up here. There’s definitely dandelions up at Twin Lakes. And the buttercups, you know, a lot of people like the buttercups around. But they will take over any open spot that’s there. And they’ve definitely got a good foothold.”

The Scouts used hand tools to dig up small patches of invasives. They also employed techniques like rugging and tarping when there were too many plants to take out by hand.

“Rugging is where we dug under the dirt under the dandelions about four or five inches, and did it for three feet, and then cut it about one foot wide. And we rolled it up like a rug and dried it out on a black tarp. And then we hit the dirt off of it and put it in another garbage bag. Then the Forest Service took it down the river. The black tarp dries it out. It cooks it, because the black tarp gets really hot and it doesn’t let any sunlight in,” said Eagle.

The Scouts made sure to use biodegradable materials like wood for staking down the tarps so they wouldn’t accidentally leave any litter behind once the tarps are removed.

Because, as seventh grader Mikel Smith said, the tarping takes a long time to work.

“Tarping is where you take a big, black tarp, and you put it over an area of invasive plants and leave it there for a few years and everything underneath should be dead and then you come out and get it,” said Smith.

The Scouts worked long days but had some time at night to explore the wilderness around them.

Freshman Curtis Wimberley said they used technology to look for some of the more elusive animals.

“We had a bat detector that would send out a high-pitched screech like a bat would have. And it would try picking up if any bats screeched. I don’t believe we found any though. [We did find a] long-toed salamander. And they put it on their GPS and sent it back to Sitka where it was recorded because they try to record every spot they find one,” said Wimberley.

After finishing with their field work, the Scouts decided to take their project one step further.

They applied to be one of the groups of youth presenters at this year’s Alaska Forum on the Environment and were accepted.

They are doing a slideshow and giving a speech about their project in front of a full auditorium of scientists, elders, policy-makers, and press.

Scoutmaster Shirley Wimberley said this is a big opportunity for the boys but it will be a challenge for them as well.

“You know, most of them have not really done this kind of presentation and they are fairly young. So, I’m just hoping that we can get it down pat and look like a cohesive group and just show the people that we can do it,” said Wimberley.

She said since they found out they were accepted in November, it’s taken a lot of time and effort to put together enough funds to get every member of the troop up to Anchorage. But, she said, it’s been worth it.

“These guys have been working very hard at all these things. And this being such a big project…we needed quite a bit of money. And the town has just come through and these guys have worked hard for two months to be able to do this,” said Wimberley.

The Scouts are presenting their project at the Forum in Anchorage on Tuesday, February 5, 2013.

To read an article about the Scouts’ project at Twin Lakes and see photos of the trip, click here.