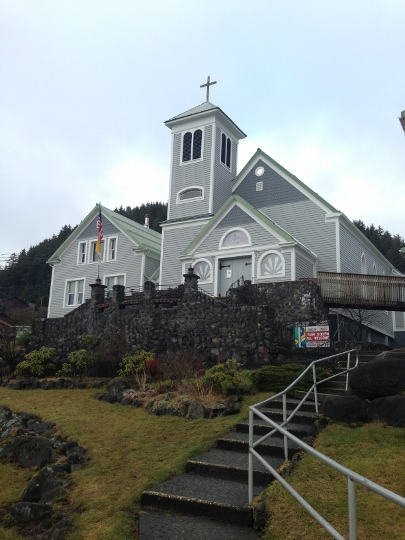 Wrangell’s St. Rose of Lima is the oldest Catholic Church in Alaska. It’s held its ground through storms, fires, and earthquakes.

But the stress of more than a century of continuous use has taken its toll. So, the parish decided to give the old building a makeover.

This is the story of an old building and an old community in Southeast Alaska. 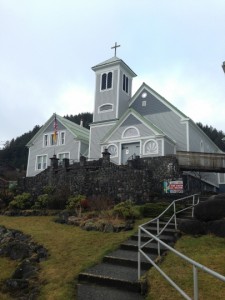 St. Rose of Lima was established on May 4, 1879, making it the first Catholic parish in the state. The two buildings that make up the church were built in the first quarter of the 20th century.

And, it’s in a rainforest, where it rains…a lot. For a wooden structure more than one hundred years old, that means rot, mildew, decay, and flooding.

And Father Thomas Weise, pastor of St. Rose, has seen his share of all of these.

We’re standing in a ditch between the parking lot and the church. A tractor is pushing gravel into a mound along the edge of the lot. Father Weise explains this is to keep water run-off from collecting in the lower ground and seeping into the foundation.

Because Wrangell is built on a fairly steep incline, any place that stops the water running downhill is a danger.

We walk down into a narrow space between the two structures that make up the church.

He says the first thing he did when he decided to renovate was dig a pit and install a sump pump. He says this was an easy fix. In other areas, preventing water damage took some creative thinking.

“And so, a lot of the time, you have to sit there and think as a water molecule that’s trying to get into your building,” says Weise.

We walk around to the front of the building.

At the top of the stairs, he points to a low wall enclosing the entryway to the church. The corner where the wall joins to the building is reinforced with concrete.

Father Weise explains that when water hits the concrete, it’s directed away from the building so it doesn’t pool and cause rot.

He says that while he was making this repair, he also made an interesting discovery.

“This corner, because of this rock wall, had rotted out—but more than once. Because when I was digging in there with my hammer, and all this wood that looked like soil is falling out of the wall, I found a beer bottle with a note in it. And it was from the people that had repaired the wall in the 60s, probably knowing it would rot out again,” says Weise.

He gets down on his hands and knees and reaches under another corner a few inches off the ground, where the front and side of the building join.

He explains that they decided to put insulation on the outside of the building, rather than inside the walls. They installed four inches of insulation and an additional two inches of plywood and siding.

He explains that they had to adjust all of the windows and entryways to compensate for the depth difference.

But this gave them the chance to deal with another problem.

“The wind blowing through the windows at night and shaking the blinds enough that it would wake me up. They were closed. In fact, they were painted closed. I couldn’t open them. But the wind was going through the glass because all the glass was that wavy glass, where you see it’s been pulled down by the weight of gravity,” says Weise.

We walk through the large front doors.

“One of the ladies said it feels like you’re inside a pink Easter egg,” says Weise.

We get inside and the temperature difference is immediately noticeable.

“People complain it’s maybe too warm, you know, because they’re used to the church being cold. They would just keep all their winter coats on when we came. And now it’s a lot better,” says Weise.

He says this new insulation has lifted a huge financial burden from the church.

“I got here in September and I looked over the accounts. And I realized we were losing our shirt in winter heating bills. And, in fact, we were in debt to the Diocese of Juneau $25,000 because we couldn’t pay our bills and pay the heating bills,” says Weise.

He says first they made the transition from oil heat to an electric boiler system, which cut their costs significantly. They saved even more by installing the thick insulation. He says they are now paying about half of what they had been.

I follow him back into a storage room. We climb up a ladder through a door in the ceiling. 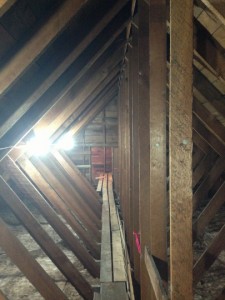 Catwalk in the attic of St. Rose of Lima – Photo by Shady Grove Oliver

It’s much colder up here—nearly the same temperature as outside. He says they installed gable vents to let air in and out. That way, it never gets warm enough to allow condensation to build up.

We walk along a narrow catwalk to the other end of the attic. Father Weise stops and points up at the crossbeams above our heads.

“I first noticed there was something wrong when I was moving some of the insulation around and I found charcoal from a fire. And I’m looking around and I’m like, there’s nothing burning up here, thankfully, because nobody wants a church fire. And then I looked up. And you can see that, one, two, three, four, four of the top edges of the trusses had caught on fire. And so I asked around and the best story I have is it must have been some embers from when part of the city burned in the early 50s that caught our roof on fire. So they never replaced them,” says Weise.

We crouch down on the catwalk and Father Weise digs under the nearly 12 inches of fiberglass padding on the ground.

“But if we dig down, you can look and you can see the embers underneath the insulation. You can see how thick this is. Here’s one. Maybe I should bring some of these ashes down for Ash Wednesday. That would be pretty funny. But look at that,” says Weise. 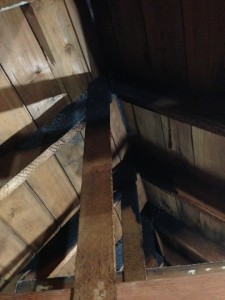 He puts the charred wood in his pocket and we head back downstairs. He tells me it’s taken a lot of work and financial support by very dedicated people to do such extensive renovations.

The church was awarded a $25,000 Rasmuson Foundation grant. They also received $10,000 from the Frank and Nancy Murkowski Family trust and a $70,000 endowment from the Carl Guggenbickler family. He says parishioners alone have donated thousands of dollars to help with reconstruction.

But, he says, there’s still a lot of work to do.

As we’re walking back outside, he stops one last time to point at the roof.

“So my next project—you see all those rusty screws? I have to climb up there and replace all the rusty screws with new screws…Do you like using a drill?,” says Weise.