Village hydroproject will cut diesel use 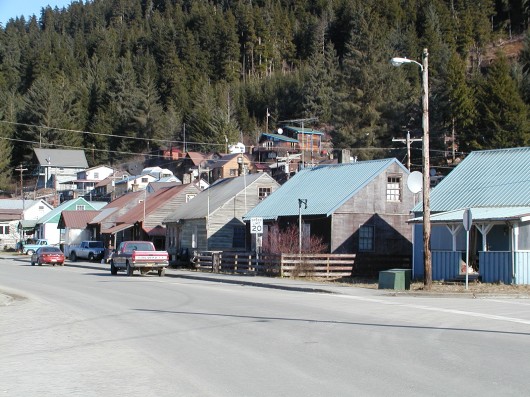 Hoonah is among Southeast communities dependent on diesel generators. A run-of-the-river power project at Gartina Falls should lower electrical rates for the Tlingit village.

The Federal Energy Regulatory Commission has issued a much-needed license for the Gartina Falls project near Hoonah.

The developer is the Inside Passage Electric Cooperative, which serves the 850-population town, about 40 miles west of Juneau.

Jodi Mitchell is CEO and general manager of the cooperative, known as IPEC. She spoke at the recent Southeast Conference Mid-Session Summit in Juneau.

“It will displace about 30 percent of our diesel in Hoonah. We’re still 70 percent diesel-dependent, but that’s very significant for the community,” Mitchell says.

The project will use a small dam to divert water from just above Gartina Falls, about 5 miles from Hoonah. A pipe will carry the water to a powerhouse at the falls’ base. Transmission lines will carry electricity to the community.

Mitchell says Gartina Falls is fully funded at just under $8 million. But she knows other Southeast projects have seen costs rise dramatically. 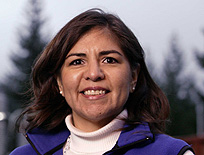 Jodi Mitchell is CEO of the Inside Passage Electric Cooperative. Photo courtesy Sealaska.

“We’re hoping to break ground, at least to put the access road in this year, then install the equipment next year and hopefully have it up and running by the end of next year,” she says.

IPEC says the falls are a natural barrier to anadromous fish and the project should not impact salmon runs.

“We’re definitely supporting of the project and in general all the communities in Southeast trying to get off diesel and trying to move on to renewable energy,” Lesh says.

One of Hoonah’s largest electrical customers is Icy Strait Point, an old cannery renovated as a cruise-ship destination. 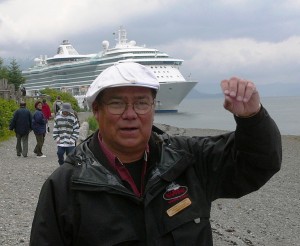 Johan Dybdahl grew up at the cannery at Icy Strait Point. Now he’s a manager of the tourist attraction there.

“That could mean a lot for us because we don’t get the benefit of the PCE, of course, so our electricity bills at Icy Strait Point run pretty high,” Dybdahl says.

PCE is power-cost equalization. It’s a state program that lowers high electrical rates for qualifying communities. Homes are eligible, but businesses are not.

Mitchell says the project faces one more regulatory hurdle, from the U.S. Army Corps of Engineers.

“Because of the project being on wetlands, they’re requiring us to set aside an equal parcel, which is about 5 acres, to classify as wetlands and say that we won’t develop it,” Mitchell says. “IPEC doesn’t own any land, so we have to make a visit to DC to try to get some help from our delegation to overcome that obstacle, because I think it’s unreasonable.”

Gartina Falls is a run-of-the-river project. That means it makes power from whatever amount of water is flowing. It has no containment dam, which would create a lake that would help average out the amount of electricity generated.

“The highest target-value resource that communities and utilities are looking for are projects that have storage capacity. So usually your lake hydros are the best,” Venables says.

But that’s not a possibility for Hoonah, Kake and some other Southeast communities. So run-of-the-river is a good alternative.

“We’re very excited to get some relief for the folks there in Hoonah, but this is just the beginning, not the end of meeting their energy needs,” he says.

The Inside Passage Electric Cooperative is also looking at the potential of a geothermal site near Hoonah. It’s near Pegmatite Mountain, at the head of Tenakee Inlet.

Residents of Tenakee Springs, to the east, have strongly objected. They say it could disturb fish habitat and change the character of the remote area.

Sealaska regional Native corporation had hoped to obtain the site as part of its final land selections. But it’s not in the latest Senate version of that bill.

The village of Hoonah is about 40 miles west of Juneau.

“That’s the project that we brought to legislators this season to ask for more funds to take a closer look,” she says.

The cooperative is asking for about $3.5 million for drilling to determine the temperature and water flow.

IPEC’s current rate structure averages out costs of power production in Hoonah and the four other areas it serves. That would lessen the impact on the community.

Mitchell says that structure is changing to a rate based on local costs. That encourages projects, such as Gartina Falls, that lower local rates.