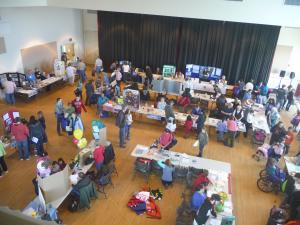 Spring is here, and the health fair is coming to Wrangell.

Coordinator Cathy Gross said visitors can expect this year’s event to be larger than ever before.

“It’s like the first sign of spring. It’s the first major event in the community. People really come out and wander around through the vendor area and just enjoy themselves. It’s a great day. It’s a huge celebration in the community,” said Gross.

Vendors are coming from all around the northwest to share their information and goods at the fair. There are participants traveling from as far as the lower 48 and as near as Ketchikan and Petersburg.

She says there will be more than 50 booths for visitors to check out, including a few that are not so traditional.

For the first time, Dolores Klinke and St. Francis Animal Shelter will have their own table.

“But also now because animals play such a big part in your wellbeing, we decided to let them set up a booth there. And she does offer a really good service to the community. She takes in the stray animals and nurtures them until they can be adopted. So that’s kind of important as far as the health of the animals in the community, as well as how they interact with the people,” said Gross.

There will also be booths promoting healthy human lifestyles. Don’t be surprised if you see the derby girls rolling around the fair. Local athletic and recreation groups will share their secrets to staying fit.

But, Gross said, it’s not just about getting in shape.

She said it’s important to think about health and health issues before they happen.

“It covers everything. We try and not just limit it to someone’s physical health or things that can go wrong, but it’s preventive,” said Gross.

That’s why, as in past years, visitors can expect to see the fire department providing free blood pressure checks.

There will be a health screening and blood test center.

The Wrangell Medical Center and Tideline Clinic assist with the testing facility. People can sign up in advance to have up to five screenings done at the fair.

There will be a general health profile, which includes blood counts, cholesterol, and liver function, a thyroid screen, a prostate screen, and an HA1C screen which tests the average blood sugar level of a person.

New this year is a Vitamin D level screening.

“Your body makes Vitamin D from being exposed to sunshine. And we don’t have a whole lot of it here. Vitamin D also helps you process calcium and works with your bones. Marla suggested that we offer it this year as something new to the community. And I’m really hoping a lot of people take advantage of it. Because I know that if it is low, it’s really important that you get that Vitamin D back in your body. And you can just take oral supplements to get it,” said Gross.

Because the tests are sponsored and processed locally, they are being offered at a discounted rate.

Also, everyone who participates in at least one screening will be entered into a drawing to win an iPad.

Although the screenings are just for people age 18 and older, Gross said the fair is a place to bring the whole family.

The State of Alaska Boating Safety Organization will be in attendance once again, doing water safety games for children.

She said kids should bring their favorite stuffed animals along for one booth.

“The teddy bear booth has been something that we have set up for a long time. Tideline Clinic is the one that sets it up. And what we do is offer an opportunity for kids to bring in their dolls and their teddy bears to get a check up from the clinic staff with the idea that, if they have to go to the doctor, it’s not such a stressful situation for them because they recognize the doctors and they recognize the clinic staff that would be checking them in for their appointments. Basically it makes them  more comfortable with their physician visits,” said Gross.

Visitors can receive a lot of services at the fair, but there is also a way to give back.

There will be a donation bin for the food bank near the front entrance to the Nolan Center.

Gross said she hopes everyone can come together and make sure every community member has access to a healthy meal this spring.

After all, that’s what the fair is all about, said Gross.

“I think for me the best thing about the health fair is seeing just how much it means to this community. And being able to be a part of that, I consider it an honor and a privilege. And so I’m happy every year even though it is a lot of work and you’re tired when it’s over with. It is so worth it to see how much it means to this community. I think that’s the main reason I do this year after year,” said Gross.

The health fair will take place April 6th from 7am-12 noon at the Nolan Center.

You must register in advance if you want to have any of the health screenings done at the fair. There will be sign-up sheets for the tests at Bob’s IGA March 22nd and 23rd.

For more information or to find out about volunteering at the health fair, contact Cathy Gross at 874-2174.