Based in Klawock, Ron Fairbanks teaches Native Arts at Craig Middle School and High School on Prince of Wales Island.

Fairbanks does a variety of types of artwork including carving silver, designing blankets and headdresses, and drawing. 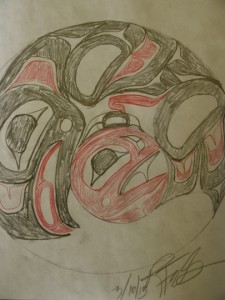 He draws using formline design. It’s the style found in most Tlingit, Haida, and Tsimshian work.

“Just recently we made a huge backdrop for our play for Elizabeth Peratrovich Day in Craig. And it’s 12 feet tall and 15 feet wide. And it’s got eagle and raven crest designs on it. It’s really huge and I put the design on by hand. I penciled it on by hand and my class painted it all on. So that’s one I’m pretty proud of. It’s pretty big. It’s pretty awesome,” said Fairbanks.

Fairbanks said it’s been a long journey from beginner to teacher. He said that when he was first starting out, times were tough. And it was art that pulled him through.

“I made a moon mask for—actually she was my boss at the time—but it was kind of a cool thing because she really fought for my position at the time. And, I was broke, of course. And the only way I could figure to pay her back was to make this moon mask. And it was pretty big. It was like 20 inches wide. It had a design around the edges and the face right in the middle. And I gave it to her. She was crying and whatnot. She was appreciative,” said Fairbanks.

He said nobody should be shy about trying art. It’s a trial and error process. He said  artists get better when they make mistakes and try again.

“You just let the artisticness flow. Trial and error is major. There’s a lot of erasing. And these guys I just taught know all about that. My drawings are all scratchy and I do a lot of erasing,” said Fairbanks.

Fairbanks said he would encourage anyone to participate in a workshop or even try to learn formline design on their own.

He said it’s more than just a hobby—it’s a fundamental part of Northwest coast culture that needs to be preserved.

“Because it’s kind of dropped off in the last 20 to 40 years. There’s been a decline in people that know how to do it. We’re just trying to regenerate and not let it slip through the cracks, so to speak. I mean there’s good artists out there now, but we’re trying to get everybody. We’re trying to educate as much as we can. Without it we would lose our identity,” said Fairbanks.

Fairbanks said it’s important to him to see people put pencil to paper. And that each of those people is invested in keeping this tradition alive.