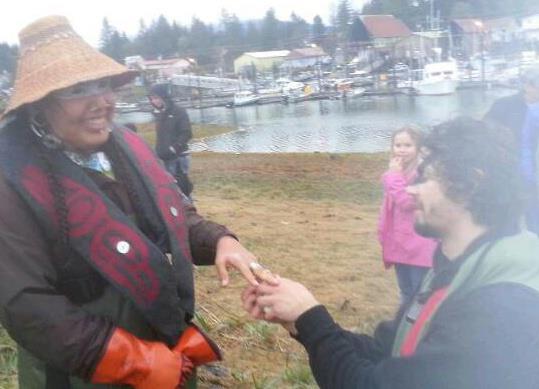 The Shakes Island rededication was a special time for many people. But for one Ketchikan couple, it marked the beginning of a new life together.

Gianna Willard, whose Haida name is Saanu Ga, and Timothy Flanery, whose Tlingit name is Gaanax’ Aya Ya’ada, are two paddlers with the One People Canoe Society.

They came to Wrangell on the Raven canoe. 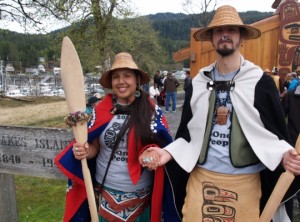 Despite a long journey, a lost and found canoe, and bad weather along the way, they were all smiles when they hit land on Thursday.

Their canoe came ashore, as expected. They got off, pulled out their paddles, and then Flanery pulled out something unexpected.

“Well, first, he tore off his hat and then said my name. And I turned around and was like, okay, what do you want me to hold?” explains Willard.

Much to Willard’s surprise, Flanery pulled a small, soggy, salt-water-logged box out of his pocket.

Inside was a diamond engagement ring.

Flanery said he knew this trip was the perfect time to propose.

“Things like this event—it doesn’t happen very often. To be a part of it is something special,” said Flanery.

They’ve both paddled on other canoe journeys before. Willard said paddling brings her closer to her Haida culture. 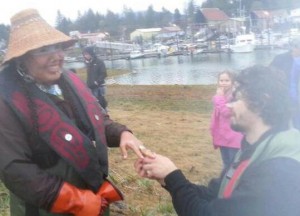 “It’s about carrying on the tradition. I like to be a good role model. Just so when the other little kids see, they can look up and say ‘Oh look, there’s that girl—she’s so into her culture. I want to be just like that,’” said Willard.

But for both Willard and Flanery, paddling is about more than tradition. It’s helped them both change their lives in an incredible way.

“He’s been tobacco and alcohol free since July—since the journey in Washington last year. And I’ve been sober for three years,” said Willard.

The One People Canoe Society holds sobriety as one of its key principles.

Flanery said Willard was the person who helped him choose sobriety. Through her encouragement and his passion for paddling, he’s on a new path.

And they’ll continue to walk that path together in the future.

“It helped me sober up and everything. She did, actually. If it wasn’t for her I wouldn’t be who I am today. She makes me completely happy,” said Flanery.