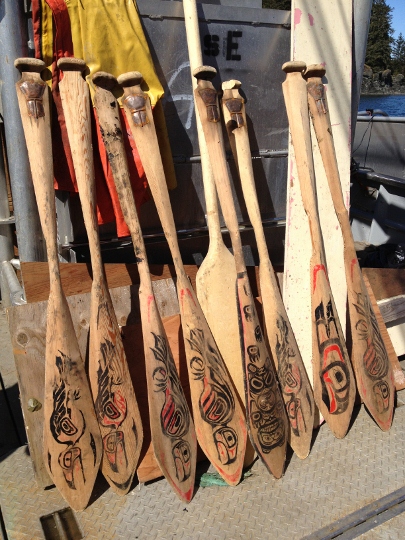 Story by Matt Lichtenstein from KFSK.

A Petersburg Fisherman early this month recovered more than half of the hand-carved cedar paddles that had been lost by the One People Canoe Society late last month.

A local hunting guide located their missing canoe as well.Two of the group’s canoes broke loose while under tow during bad weather on their journey to the historic Shakes Tribal House Rededication in Wrangell. 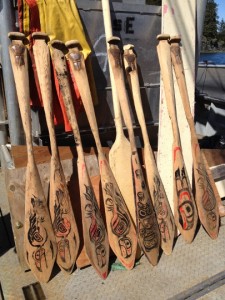 They were thrilled to hear about the finds.

When Petersburg’s Jeff Erickson heard KSTK’s radio story about the lost canoe and cedar paddles, he thought he could help.

Erickson is a longtime commercial fisherman and has beachcombed in Seymour canal for 20 years so he was sure he knew exactly where the paddles would wash up. He headed to Seymour just before the herring fishery there early this month.

When Erickson returned to his boat, the rest of his crew wanted to help so they all went back out to the beach. He says they searched about 12 miles of beach over a three day period and found a total of 24 paddles and about the same number of life jackets as well as some seat cushions. The crew of the state research vessel Medea agreed to take the paddles and gear back to members of the One People Canoe Society in Juneau.

Erickson was happy with his crew for taking part in the search and he calls the experience of finding the paddles very spiritual.

Erickson says he feels very strongly that the paddles need to be returned and if anyone else finds more, they should do the right thing and return them to their owners.

Making the individualized paddles was part of the journey for the Canoers as well those who helped sponsor their trip. Alicia Chiton is one of the organizers of the one-people-canoe-society in Juneau.

The Yakutat and Juneau Crew’s paddles washed away when two of their canoes broke loose while under tow in rough weather near Seymour. Chilton thinks the group lost 42 paddles in all. They initially recovered both canoes, but one broke loose a second time and remained missing.

Chilton says the group received word last week that Petersburg hunting guide Scott Newman had found that missing canoe in Gambier Bay off Admiralty and moved it to a more protected spot.

One People Canoe Society crews from Juneau, Yakutat, Sitka and Kake joined others from Prince of Wales and Wrangell for the rededication of the shakes Tribal house in Wrangell early this month.

Anyone who finds more of the group’s paddles or other gear can contact Alicia Chilton at 907-209-5616.