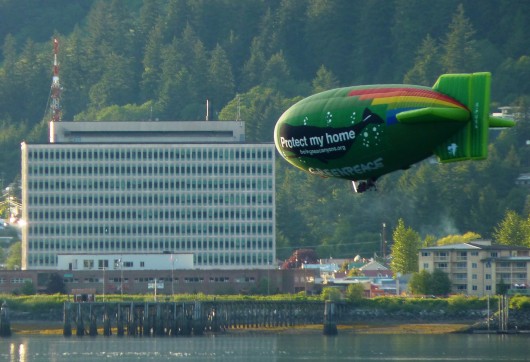 Most who saw it called it a blimp, but technically, it was an airship.

The environmental group Greenpeace inflated the floating billboard at a Douglas Island ballfield Saturday evening, then flew over Gastineau Channel to downtown Juneau and back.

(Click here to watch of video of it flying.)

Greenpeace is in the capital city for a North Pacific Fishery Management Council meeting. The Washington, D.C., -based group is arguing for protection of deep canyons in the Bering Sea.

He says Greenpeace has studied the canyon ecosystem and is presenting its results to the council.

“It’s an incredibly important area ecologically as well as economically. If fact, they call it the green belt, it’s so productive. So unfortunately, there are no protections along this entire greenbelt, even though it’s so important,” he says.

“And what we want to see is … representative portions of habitat protected, set aside as an insurance policy to make sure we don’t make any really costly mistakes.”

“The airship is a thermal airship, so it’s actually full of hot air. So a lot of people immediately associate the shape with a blimp. But it’s not a blimp and it’s filled with air. So it functions very similarly to a hot air balloon,” she says.

She says the German-made, nylon-skinned airship is one of four in the United States.

The ship deflates down to a size that can fit in a trailer.

Hirsty says the Juneau stop was the only one planned for this Alaska trip.