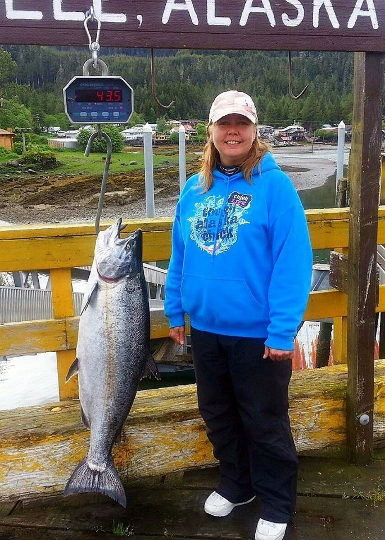 The 2013 Salmon Derby wrapped up Sunday evening in Wrangell.

That salmon led her to the $6000 first place prize along with the $500 week four prize.

She also reeled in the Silver Bracelet for the largest salmon caught by a woman. 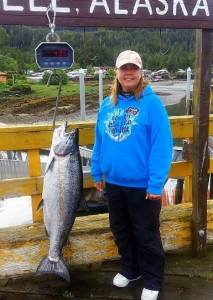 Jeff Soles came in third with his 40-pounder caught at The Nose.

Josh Gildersleeve took fourth and the week one prize for his 38.5 pounder caught at Found Island.

Megan Talburt came in sixth with her 36.5 pounder from Babbler. James D. Leslie took seventh with his 35.7 pound fish from the Front of Town.

Celsee Churchhill came in point one pound behind Leslie with her 35.6 pounder caught at Earl West.

Jeanie Arnold took ninth at 35 pounds from The Nose.

And Randy Easterly caught tenth and a 34.4 pounder at Ham Island.

And the Youth prize goes to 12-year old Kayla Hay for her 27.8 pound salmon caught at South East Cove on June 9th.

This year’s derby was from May 11th through June 9th.

The awards ceremony will be Thursday, June 13 at 6:30 pm at the Nolan Center.