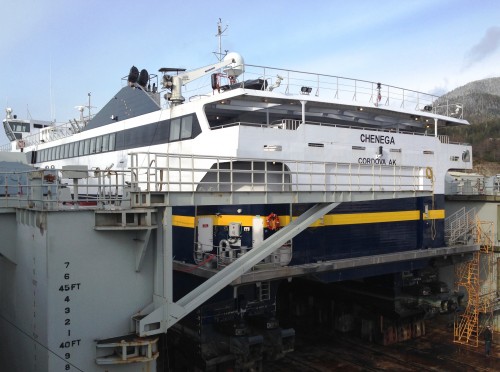 The fast ferry Chenega is up on blocks for repairs and maintenance at the Ketchikan Shipyard Feb. 21, 2014. The Alaska Marine Highway, roads, airports and other transportation projects could get a funding boost under Legislation moving in the state House. (Ed Schoenfeld/CoastAlaska News)

A measure setting up an Alaska Transportation Infrastructure Fund has gotten some traction in the House. But two companion bills are not seeing the same attention.

The resolution seeks to amend Alaska’s Constitution to create a fund that would pay for airport, highway and similar projects. If the measure passes the Legislature, it would go before voters in the November general election.

“We’re putting more and more people on roads that were designed for the ‘70s. Our ferries are old and well-maintained, but the older ferries cost a lot to maintain, and they’re coming to the end of their projected life expectancy,” she said.

The constitutional amendment passed out of the House Finance Committee on Friday. The two bills, which set up and put money in the fund, were before the committee earlier this month. They have not been scheduled for further hearings.

Committee member Les Gara, an Anchorage Democrat, said the fund is a bad approach to budgeting.

“The benefit of getting an amount of money for transportation that we would likely appropriate anyway, compared to the burden, which is a faster depletion of what might remain of our $17 billion in savings, weights in favor of protecting our savings and then funding transportation on an annual basis,” he said.

At an earlier hearing, Wilson said she only expects to get the constitutional amendment through the Legislature this session.

To do that, she will have to get it passed by the full House and through the Senate.

“We understand this is not the year to ask for $2 billion. Even in a year with abundant revenue, this would be difficult. This endowment could be a lesser sum with the idea of adding to the endowment when our saving accounts are more flush,” she said.

The measure needs to go before the voters because Alaska’s Constitution prohibits dedicated funds.

Here are the three measures: