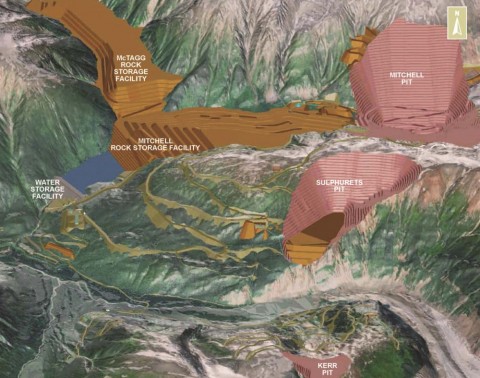 Transboundary mine opponents are trying a new tactic in their opposition to a project northeast of Ketchikan. They’re telling investors, and anyone else who will listen, that the KSM mine is a bad place to put their money.

The group Salmon Beyond Borders just released a study detailing its opposition to the Kerr-Sulphurets-Mitchell, or KSM, mine.

It’s a copper, gold and a silver deposit upstream of two rivers that enter the ocean within about 50 miles of Ketchikan.

The report claims the mine is too remote, too expensive and too dangerous to the environment.

“We’re trying to make sure people understand the risks and uncertainty of KSM,” says Chris Zimmer, who works with Salmon Beyond Borders, a coalition of environmental, tribal and fisheries organizations.

“The company’s put out a very rosy prospectus and environmental assessment and is probably going to be starting looking for major investors and development money … And part of our task here is to make sure that observers and folks interested in the KSM protect understand the risk,” he says.

That’s not how mine developers see it. 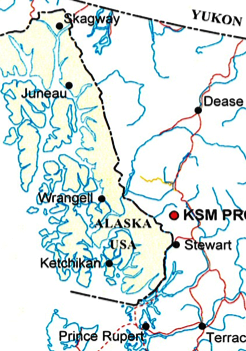 The Kerr-Sulphurets-Mitchell Mine is one of several northern British Columbia mines near rivers that flow through or near Southeast Alaska. (Courtesy SEACC)

He says Seabridge won’t build or operate the proposed $5.3 billion mine on its own. And it’s already talking to investors, which he wouldn’t name.

“We have confidentiality agreements with major mining companies and discussions are ongoing. We have people who are going through our files,” he says.

The Salmon Beyond Borders report mostly repeats earlier statements made by mine opponents. But it cites more sources and includes more details.

And its impact could be different.

That’s because the press release about the report was distributed on MarketWired, a business-oriented public relations website.

Zimmer says it targets government officials and the general public. But he hopes it will also be read by potential investors.

“People need to take a second look at this thing and hopefully look at information not just from the company,” he says.

Among his group’s claims: KSM is not economically feasible.

“Several analysts have looked at this and said, ‘Boy, the price of gold needs to be quite a bit higher to make a project like this economical,’ given the low grade of the ore and the overall expense here,” he says.

KSM’s Murphy says that’s not the case. The numbers are getting better and continued drilling has found more and better deposits at two of its four proposed mining sites.

“We’ve extended the Deep Kerr to both the north and south. And we’ve also identified a higher-grade core at depths association with the Iron Cap,” he says.

KSM’s ore will be extracted from one valley, then transported through tunnels to another, about 15 miles away. That’s where it will be processed and leftover rock stored.

Salmon Beyond Borders’ report points to others with competing claims in the tunnel area.

“These companies, American Creek and Teuton Resources, have said very clearly and very publicly that Seabridge does not yet have the rights to be granted access to claims. And therefore [it] doesn’t have the right to begin to construct that tunnel,” he says.

“The province, when they granted that, was well aware of the fact that there were other land tenure-holders and they have rights to the minerals. And it doesn’t prevent access by other parties to their properties,” he says.

The world economy could have more impact on mine investments than the critics’ PR effort.

“I think commodity prices are dampening the spirits of investors. Companies that would typically invest in mining projects are investing in other things. And I don’t think it’s just B.C. I think it’s everywhere,” he says.

Bennett says the provincial government hopes mine owners find investors. But they face many other hurdles.

“We support mining in the province. It brings good jobs to the people in B.C. But they have a lot of government process to go through yet before they’ll ever be digging a hole in the ground,” he says.