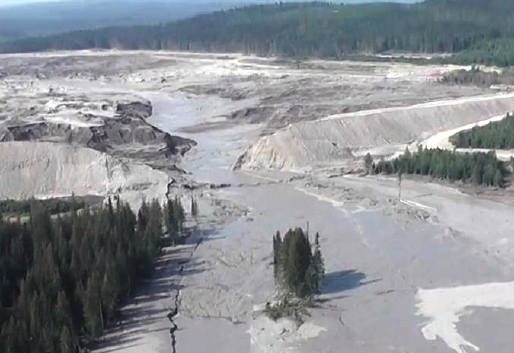 Poor design led to last summer’s catastrophic failure of a British Columbia mine tailings pond. That’s the conclusion of an investigation ordered by provincial officials and released Friday.

Mine critics in Southeast Alaska says the report illustrates their concerns about Canadian mines in watersheds that drain into or near the Inside Passage.

The engineering report identifies the likely cause of Aug. 4’s dam failure at Mount Polley, an open-pit, copper and gold mine in east-central British Columbia.

A small part of the dam collapsed and millions of gallons of silty water poured through, widened the gap and sending a huge amount of water into nearby creeks and lakes.

The report says the breach was caused by failure of the dam’s foundation. It says too much weight was put on an underground layer of glacial sand and gravel that developers and inspectors didn’t know about.

Sitka Mayor Mim McConnell is among those saying the report gives credence to concerns voiced by Southeast Alaska leaders.

“We need to protect our waters. And what they do upstream does affect us. It could have a huge impact if there were another spill. And the United States has to have a say on what happens in Canada on this particular issue,” she says.

The report recommends more stringent standards for tailings-pond design, as well as better government inspections. Both could affect other mines in the province, including projects under development near waterways that flow through Alaska.

Karina Briño is president of the Mining Association of British Columbia. She says the report could speed, rather than slow, permits needed for new development.

“Decisions have been put on hold because we were waiting for this report. That clarity from government and the regulators will be helpful for the industry,” she says.

She says mining companies are going through the report. And they’re committed to build safe mines.

“In my mind and in the minds of many other Alaskans it’s whether business as usual will be changed fast enough,” says Juneau’s Heather Hardcastle, a gillnetter and co-owner of Taku River Reds, which catches and markets salmon.

She doubts serious changes will happen, because of the report, since the provincial government is doing all it can to support mine development. B.C. Premier Christy Clark this month announced her government would increase the Ministry of Mines by nearly $10 million.

“It certainly is a concern about the speed at which projects in B.C. for the last five to eight years have been evaluated, permitted, developed and constructed. And Mount Polley does raised red flags about the quality and frequency of inspections,” she says.

Mount Polley does not drain into any Alaska watersheds.

But its owner, Imperial Metals, is about to open the Red Chris Mine near the Stikine River, which enters the ocean near Wrangell and Petersburg.

Another mine under exploration is the KSM, which will operate near two watersheds that drain into the Pacific within 50 miles of Ketchikan.

And, there’s an attempt to reopen the Tulsequah Chief, a mine on a tributary of the Taku River, near Juneau.

“There’s nothing that the Canadian government or their environmental people can say to us that would make us feel better,” says Ketchikan’s Rob Sanderson Jr., who co-chairs the United Tribal Transboundary Mining Work Group.

He’s concerned about impacts on subsistence and commercial fishing.

“I think they’re again going back to that Band-Aid approach. I don’t think that’s going to hold,” he says.

Mine critics are lobbying the U.S. State Department to put transboundary mines before a panel that resolves cross-border conflicts. So far, there’s been no action.