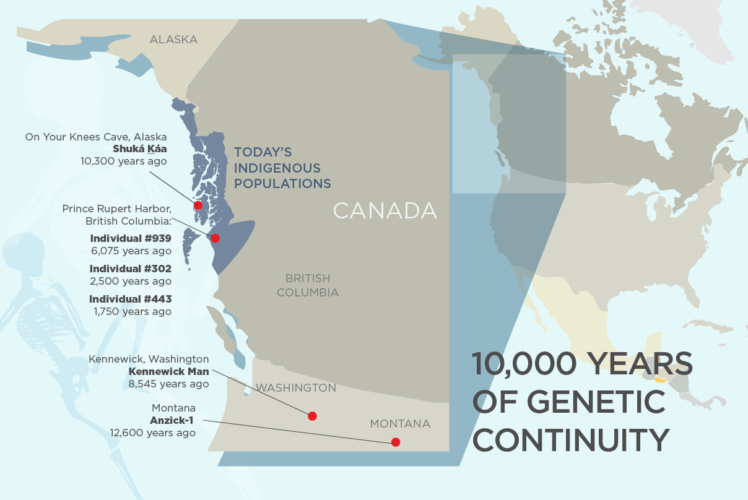 Map of remains used in the study to draw connections between modern-day natives and Shuka Kaa. (Courtesy of Sealaska)

The oral tradition of Southeast Alaska’s Tlingit and Haida people says they’ve lived in the region since time immemorial. Now, there’s evidence connecting present-day Southeast Native groups to 10,300-year-old skeletal remains found on Prince of Wales Island. That’s according to a new study published in the Proceedings of the National Academy of Sciences.

A team of scientists from universities around the country has been studying DNA from Shuka Kaa, 10,300-year-old skeletal remains, for about 10 years. Shuka Kaa, Tlingit for “Man ahead of us,” was found in a cave on Prince of Wales Island in the 1990s.

The team’s most recent study shows that Southeast Native groups have resided in the region for at least 10,000 years. But, to understand the latest findings, you need to grasp their previous efforts.

Sealaska and Southeast tribes gave the OK for scientists to find the connection between the remains and modern-day decedents. Brian Kemp, associate professor of anthropology at the University of Oklahoma, lead the initial study using mitochondrial DNA.

“Mitochondrial DNA is passed solely from mother to offspring, and then it can only be passed on from her daughter to her grandchildren,” Kemp explained.

Kemp took more than 200 samples from contemporary Southeast Natives, but the maternal line could only be traced to 6,000-year-old remains found near Prince Rupert, British Columbia.

“It’s possible that some women only had sons or didn’t have children at all, but somehow that mitochondrial DNA didn’t get transmitted to current populations,” Kemp said. “This mitochondrial type had been hanging out, if you will, for about 5,000 years.”

But, other information was gleaned from the effort. Ripan Malhi, associate professor of anthropology at the University of Illinois, worked with Kemp since the beginning. They found modern Native groups, Tlingit, Haida and Tsimshian, are all very closely related.

Now, new technology has enabled Kemp and Malhi to get a more robust DNA sample from two molars pulled from Shuka Kaa’s remains, bridging the gap to present day.

“All the DNA that was in the tooth where the DNA was extracted from, and that’s going to include both the human DNA, the nuclear DNA, as well as the mitochondrial, a bunch of bacterial DNA,” Malhi said.

After sorting through the sample, the team was able to pick out the human DNA and sequence about 6 percent of Shuka Kaa’s entire genome.

“With the nuclear genome, we get all of your ancestors and their contributions to an individual,” Malhi explained.

The study also found that northwest coastal groups have a distinct lineage compared to 12,000-year-old remains found in Montana.

“You have these two genetic lineages, two groups of people that are genetically distinct living over 10,000 years ago in the Americas,” Malhi said. “So it suggests that the peopling of the Americas was more complex than most people think.”

“The scientific data shows that we’ve lived or indigenous people have lived here in Southeast Alaska for at least 10,000 years, or as the Tlingit and Haida say, since time immemorial,” Worl said.

Sealaska has commissioned other studies such as differentiating interior Natives from coastal groups, and is currently working with a University of Pennsylvania professor to see if genetic differences within Tlingit clans can be found.

Some similar intrusive studies have led to contentious battles between tribes and scientists. But Worl and Malhi noted this study was a cooperative effort.