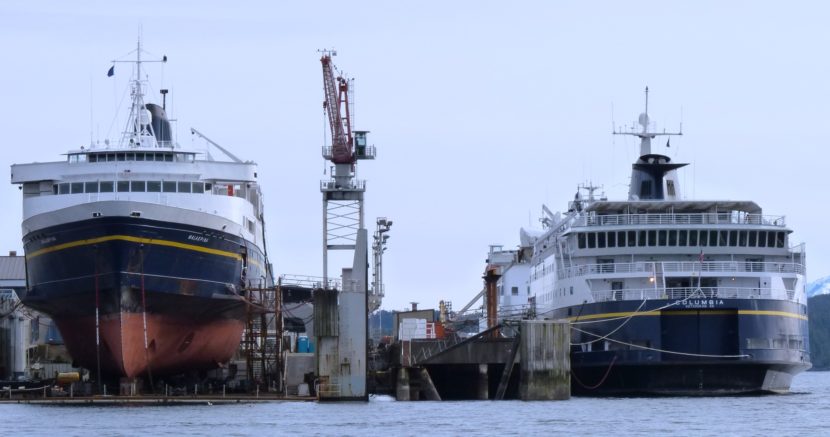 The ferry Malaspina is shown in drydock and the Columbia is tied up at the Ketchikan Shipyard in February, 2012. Damage to the Columbia is delaying its return to service this fall and the Malaspina will help fill in. (Photo by Ed Schoenfeld/CoastAlaska News)

Alaskans have until the end of the month to tell the Marine Highway System what they think of its fall, winter and spring sailing plans. The schedule, which is similar to last year’s, came out later than usual and the comment period is shorter.

Last year, the fall-winter-spring ferry schedule was released in May. Residents had about a month to go through it and provide feedback.

This year, it wasn’t made available until mid-July, with a comment deadline two weeks later.

“Well, we can’t put schedules out to comment on until we have a final budget figure. So, being that we were running a little bit late this year, we just got a late start,” he said.

He said the ferry system wants a fast turnaround so it can begin taking reservations during the first week of August.

Written comments on the schedule are due by July 30 and a teleconference will be held the following day.

Read the ferry system’s letter to communities, which includes the draft schedule and links for public comments. 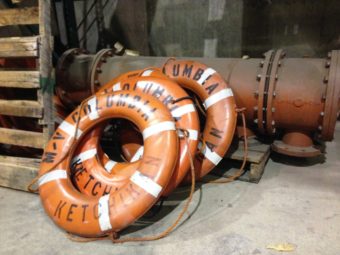 Marine Transportation Advisory Board Chairman Robert Venables doesn’t see that as a problem.

“It is a shorter public review and comment period. But I think most folks are very familiar with the schedule and the system and their needs. So, it’s best to get that schedule published and open for reservations,” he said.

One reason he’s not worried is that the schedule is very much like the previous year’s.

Falvey said a few sailings have been added, but not many.

That’s due to lengthy repairs to the ferry Columbia, which usually sails between Southeast and Bellingham, Washington. It’s been out of service since last September, due to a damaged propeller system.

“Those parts don’t exist. It’s all 1973 vintage and over the winter, that entire system had to be rebuilt in Germany. And we’re still not there yet,” he said.

The draft fall schedule shows the Columbia resuming service Oct. 1. But Falvey said that’s now pushed back about a month. Other ships will fill in.

The Columbia, the system’s largest ship, was damaged when it struck an underwater object. Falvey’s not sure what it hit, but it wasn’t a rock.

“There was something floating under water. A lot debris could have been floating 10 to 15 feet under the water,” he said.

This summer’s ferry schedule was published last fall, long before lawmakers decided how much money the system would get.

Officials committed to keeping that schedule, saying any funding cuts would be absorbed later in the fiscal year.

Venables, of the Marine Transportation Advisory Board, said the system had no choice, since last-minute changes would hurt summer tourism. But he said it’s not the best way to build a schedule.

“When you have very little notice on what the funding level’s going to be, then that uncertainty leads into the No. 1 revenue-generating month, which is July … it has ripple effects throughout the rest of the year,” he said.

The schedule, which covers October through April, uses nine of the marine highway’s 11 ships. The fast ferry Chenega is out, in long-term storage, and the mainliner Taku is for sale.