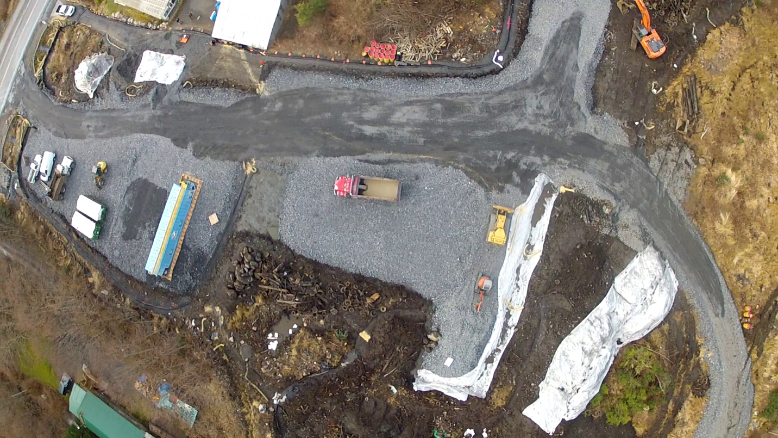 Old cars and other trash were removed from the former Byford Junkyard site, leaving lead-contaminated soil, as shown in this 2016 aerial photo. The soil, which has been treated to bond the lead, will be trucked to a quarry near Pat’s Creek. (Photo courtesy Department of Environmental Conservation.)

State officials apologized to Wrangell residents this week for the controversy surrounding plans to store contaminated soil near a popular recreation area. They also said they’d move the nearly 20,000 cubic yards of lead-laced material out of town if they could.

The controversy surrounds a state plan to move the soil out of an abandoned junkyard the municipality took over years ago. It will be trucked to a rock pit near Pat’s Creek and Pat’s Lake, about 10 miles south of town.

Many residents were angered earlier this summer when they learned that trucks were slated to start moving at the end of July.

In response, the Department of Environmental Conservation and its contractors came to Wrangell to explain their plan and answer questions.

But first, John Halverson of the state’s Contaminated Sites Program took some responsibility. He said the state and its contractors should have done a better of job reaching out to the community, including its tribal council, the Wrangell Cooperative Association.

“That was our mistake. And in hindsight, I think if we had done more outreach earlier on, people would be pretty comfortable with what we’re proposing to do,” he said.

Under the plan, about 2,000 loads of contaminated soil will be trucked from the junkyard site to a rock pit on state land near Pat’s Creek.

Several people at the meeting asked whether that was safe.

Jason Ginter, with the contractor Nortech, said it’s been treated with a product called EcoBond that chemically reacts with the lead.

“The point of using the phosphate-based additive, such as the EcoBond, is so that it binds with the lead and becomes insoluble. You could put it in water and stir it all day and it won’t dissolve,” he said.

Officials told those at the meeting that trucks moving the soil will be lined and sealed to keep it from falling or blowing out.

Several residents asked why that’s a concern, since it’s been treated to bind the lead. The answer: While the lead won’t wash out, treated soil is still unsafe if it’s ingested by fish, animals or people.

Another question was how the soil will be stored at the rock pit so it doesn’t damage Pat’s Creek, which is very close. That answer: The pit will be lined and capped to keep most of the water out. Officials also said any moisture that makes it through won’t end up in the creek.

The plan says trucks will make about 20 roundtrips a day. They’ll operate from 6:30 a.m. to 6:30 p.m. weekdays only, so they don’t interfere with weekend use.

But contractor NRC’s Shane O’Neill said the material can’t be too wet when it’s moved and stored. And while they’ve planned for Wrangell’s weather, it could be a problem.

“Right now, at the best point in the pile, we’re already over half the way to not being able to compact it. So if it’s raining, we’re not going to be able to dig it, get it into the truck, get it to the site, spread it out into a thin layer (and) compact it before it gets too wet,” he said.

The soil is being stored, covered, at the old junkyard, which was abandoned about 10 years ago. Several residents asked why, since it’s now relatively safe, it can’t stay there.

“It’s on clay and it’s steeply sloped and it’s near the marine environment in an area in town where it would be difficult to maintain over the long-term, even if it was an appropriate site,” he said.

Officials originally planned to ship the soil to a hazardous-waste landfill in the Pacific Northwest. That’s what happened with some of the other material found in the junkyard.

“If somebody can come up with other funding, that might be an option. But we don’t have that available to us. And we don’t want to keep it here longer than we have to because it’s a challenge to maintain that cover,” he said.

He said the project has already gotten what it can from the state’s emergency cleanup fund. And more money is not available from the federal Environmental Protection Agency, which helped with earlier phases of the project.

The community meeting went about two and a half hours, with dozens of questions asked and answered. But it didn’t satisfy everyone in the audience.

Resident Virginia Oliver said she appreciated the work of the state and its contractors.

Officials said the trucks are unlikely to begin moving soil until spring. The project also needs to get a permit from the U.S. Forest Service, which controls part of the road to the disposal site.