Wrangell’s volleyball team celebrates a near victory and new record 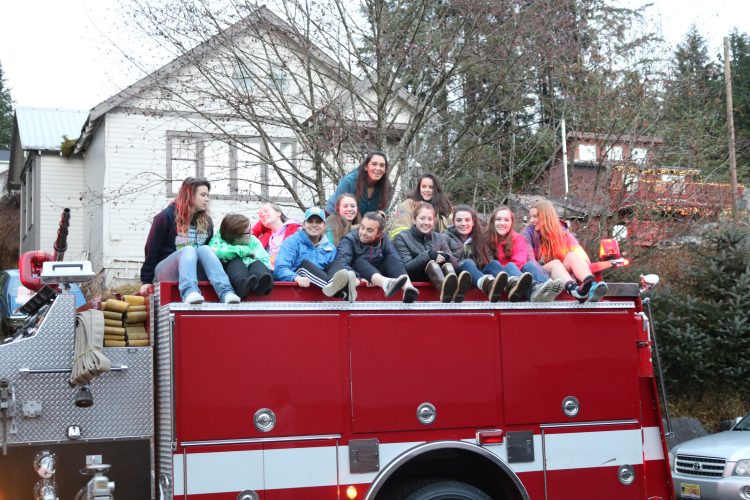 Wrangell High School’s girls volleyball team got to finals in the 2a state tournament. That’s the first time ever. (June Leffler/ KSTK)

It’s Monday. The sky is gray and everything’s damp. It’s definitely a day to accept defeat. Wrangell’s girls volleyball team went all the way to state, and lost in the final round to Petersburg.

But it actually is a huge accomplishment for the high school. And the students are celebrating by putting the team on the city’s firetruck and parading them around town for the afternoon.

This season marked the first time Wrangell’s volleyball team has ever gotten to the finals, according to Alaska School Activities Association records and the head coach, Jessica Whitaker.

The Alaska state volleyball tournament starting in 1971. The last major victory for the Wrangell Wolves was in 2000 when they got fourth place.

The 2A tournament was held at Dimond High School in Anchorage Nov. 30 through Dec. 2.  It is a double elimination tournament. Each team gets one free loss.

Wrangell beat Petersburg Vikings in the semifinals Friday, 3-1, sending them to the loser bracket. Still in the tournament, Petersburg turned around and beat King Cove, setting the team up for the final match with Wrangell. The Wolves came into the finals with the advantage, but the Vikings won Saturday’s match 3-0 and the sudden death game 30-15.

“We knew we’d most likely see Petersburg again. They’re a very tough team. We saw them and had some close games that first match and then we went to the if game to 30 and they just dominated us,” Whitaker says. “It’s just the girls are so friendly with them, they know them, it wasn’t any hard feelings. They were really proud of their accomplishments and getting that far.”

Captain Helen Decker had a rough season, but a good one. She’s walking in crutches after a nasty spill. Everyone is asking her how she’s going to get into a firetruck with a leg injury.

“Well it’s called a team for a reason and they’re going to help me,” Decker says.

The team is half seniors and half underclassmen. So, Whitaker’s team will do some rebuilding next year.

The Lady Wolves will play a final alumni match on Dec. 16 in the high school gym.