Wrangell reflects on the sea, loss with proposed Mariners’ Memorial 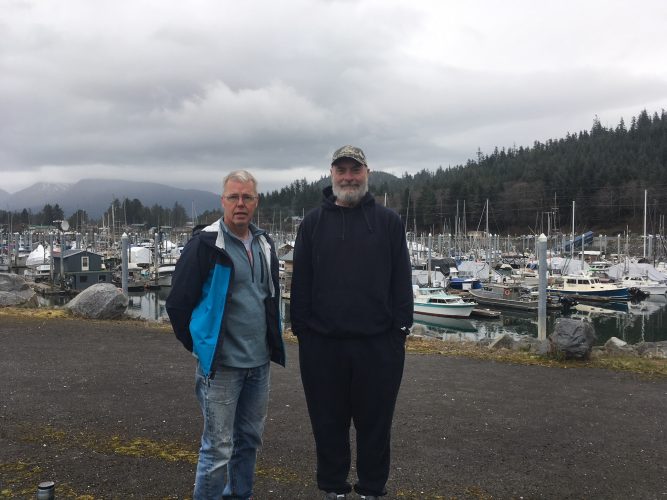 Brennan Eagle and Gig Decker are at the breakwater of Heritage Harbor in Wrangell. This is the spot where the proposed mariners’ memorial will be built.

A group of mostly fishermen is fundraising to build a mariners’ memorial in Wrangell. Organizers say it’s a way to remember those lost at sea.

Gig Decker has been a commercial fisherman and diver for decades.

“Every single year, for 33 years of commercial diving, I got the hell scared out of me and I came close to drowning,” Decker says.

He remembers one instance when he was diving in the Alexander Archipelago.

“I was following into a cave that was interesting and the lights went out, before I knew it I was in complete darkness,” he says. “My head hit the top of the cave and I thought it was all over for me.”

Decker calmed down and found a glimmering light. He was able to make it out.

One-hundred seventy nine commercial fishing fatalities were reported in Alaska from 2000 to 2014, according to the National Institute for Occupational Safety Health.

Decker and others are fundraising to build a $300,000 memorial at Heritage Harbor in Wrangell. So far, they have 200 members offering local support. Board members are soliciting larger corporate and foundation donations as well.

Brennan Eagle is the memorial treasurer and has been commercial fishing for 40 years. He says the site will be a 100-foot long corridor with steel walls that display the names and stories of those lost at sea.

“And then there will be a pavilion for reflection, for gatherings, for ceremonies that will be at the end of this,” Eagle says.

The memorial isn’t meant to scare anybody, but it should remind folks of the realities of working at sea.

“I think it’s a great place to work. I’ve had a lot of fun on the water. Every day is different, but it’s something you have to respect,” Eagle says. “We do as much as we can to prepare so that in case something does happen you can deal with it, but you also have to respect that things can happen that are out of your control.”

Aside from the loss of life, the memorial will note Wrangell’s historical relationship to the ocean. It will note the different maritime industries, from tugboat transportation to tourism, that have served Wrangell.

“A site like this can help us develop a sense of belonging in young people that are entering the maritime workforce,” Decker says.

It will also depict Alaska Natives’ long interaction with the ocean.

And the group hopes to publish a collection of stories from locals who’ve lost someone.

Construction should begin in Spring of 2019.

The memorial board members will be speaking about the memorial and their personal stories of loss this Saturday at the Stikine Inn and 7PM. Free entry for members.