Betties ’bout to take you out 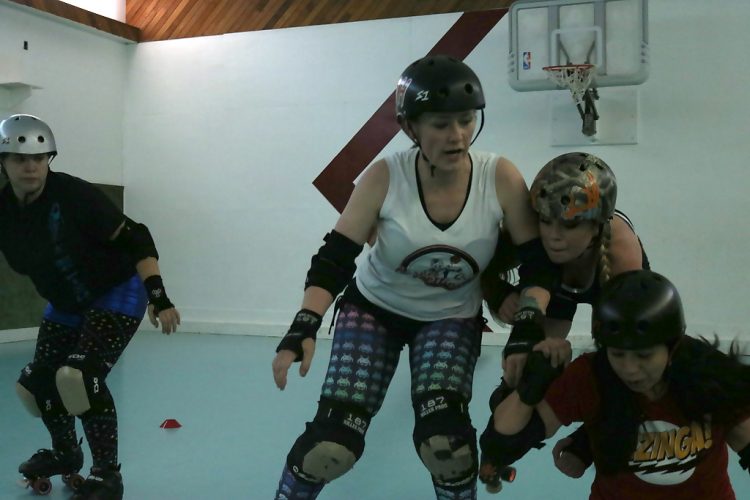 Roller Derby’s popularity continues to rise across the country, and Southeast Alaska’s small towns are no exception.  In Wrangell, local women organized the Garnet Grit Betties years ago, and the team is still going strong. KSTK’s June Leffler went to some practices to find out what it takes to play.

Kristina Decker joined the team last fall. She says when she mentioned her new hobby at work that some women told her she was “too nice” to roller derby.

Marsha McCay has been around longer, and she agrees there is a common misconception about the image of women in the game. She was surprised by the players herself “how tough the people are on the court but how kind they are outside the court.”

Some might think roller derby is a lawless playground of women punching each other. One time, that may have been true. But since roller derby’s revival as a club sport in Austin, Texas almost 15 years ago, the game is rough, but regulated.

“We don’t get to elbow people,” McCay says.

In fact there’s a ton of rules for the game.

The simplest description is this: each team has a skater – called a jammer — who’s trying to lap around the track as quickly as she can, but the four blockers of the other team are trying to stop her using their upper arms, torsos, and hips.

Roller derby is played in 2-minute periods called “jams.” The Betties practice starting their jams over and over. The blockers position themselves side-to-side, forming a wall. Einert, the jammer, tries to break through them. When she does, she’ll be able to skate all the way around the track and start scoring points.

This is not a sport anyone grew up playing. So the women are usually just bringing some basic skating experience.

Decker says she’s come a long way since day one. “I hugged the wall most of the time.  Actually for the first four practices the wall was my friend,” Decker says. “But once I started getting more confident being on the skates, it started progressing a lot faster. It’s actually pretty… invigorating.”

Derby is a full-contact sport  — a first for many on the track. The women get their butts kicked physically and emotionally. In moments of desperation they whine about having to do jumping jacks in their skates. But they know their bodies are getting stronger

Einert says she’s not looking for the toughest women or the best skaters. It’s about finding the ones that can commit.

“You have to enjoy what you’re doing or you’re not going to show up,” Einert says.

Wrangell’s Garnet Grit Betties will play their first game, or bout, of the season on St. Patrick’s Day, March 17th in the high school gym at 4:00 PM.