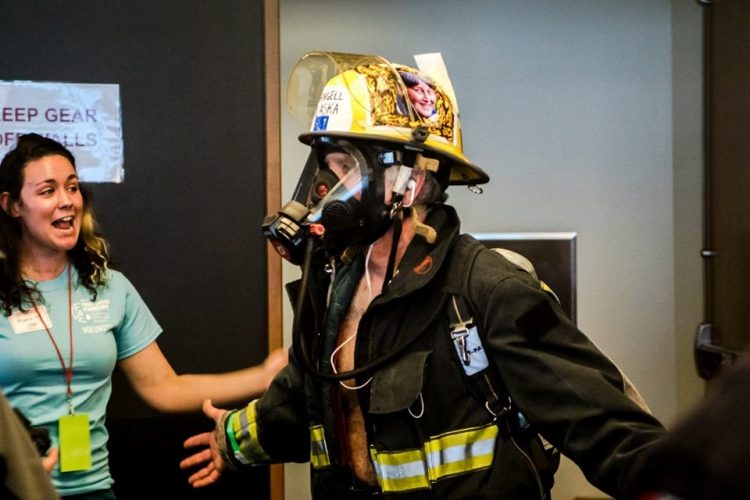 Walter Moorhead wears a photo of his late wife on his helmet for the Scott Firefighter Stairclimb to benefit blood cancer research. She died of cancer in 2015.(Courtesy of Walter Moorhead)

Volunteer firefighters in Wrangell have been hitting the Stairmaster pretty hard lately. That’s because they are participating in the Scott Firefighter Stairclimb in Seattle next month. The climb raises funds for blood cancer research.

I go to the local fire hall to train with one of the firefighters. Walter Moorhead is fitting me in standard firefighting gear. That includes flameproof boots, bib pants, a coat and a helmet. I strap on an air tank and breathing mask. Moorhead estimates everything weighs 50 pounds.

But thankfully, we’re not putting out a fire today. Instead, we’re training for what organizers call the world’s largest stairclimb of its kind. Firefighters scale 69 flights of stairs in a downtown Seattle skyscraper. And they have to wear their full gear. 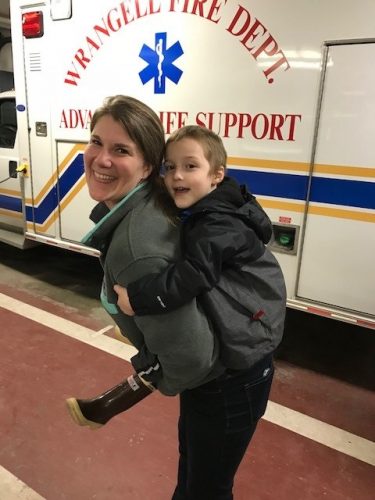 “All of this gear is designed to keep the heat out when you’re in a fire, but insulation doesn’t know direction so it also keeps the heat in when you’re exercising,” Moorhead says.

The Leukemia and Lymphoma Society of Washington hosts the event. The connection might not be obvious, but cancer is the leading cause of death for these responders, according to the International Association of Firefighters.  When modern synthetic goods burn, they produce dangerous smoke and soot.

So far, the Wrangell team has raised more than $10,000 this year. And most of the Wrangell volunteers have someone person they’re walking for. Moorhead’s wife, Carol Ross, died of cancer in 2015. For the climb, Moorhead pastes her picture on his helmet.And the team is honoring local cancer patient Jamison Houston.

Moorhead hits the Stairmaster about five times a week. He walks 80 floors on the machine to match the taller flights of a commercial building. 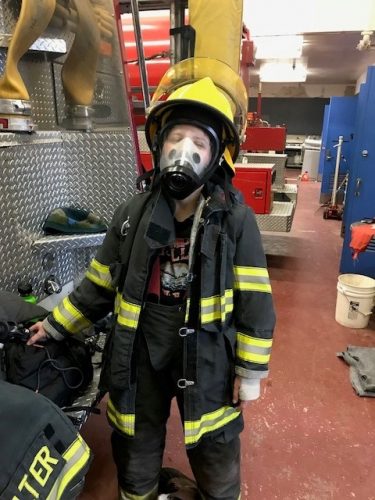 Now that I’m suited up, I step on the machine. The clothing is heavy and awkward. And the mask is making me claustrophobic. I only did 10 flights. I’m trying to save face in front of a guy that is 64 and able to knock out the entire thing in 22 minutes.

“I’ve had younger firefighters come up and shake my hand and say they were impressed to see that an old man could do this,” Moorhead says. “I said ‘That’s mister old man to you.”

Moorhead and the rest of his team will participate March 11th in Seattle at the Columbia Center. Their pages and donation information are available on the Scott Firefighter Stairclimb website.