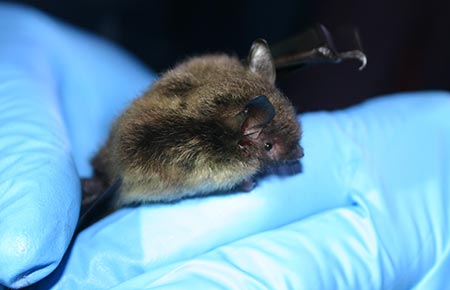 Myotis lucifugus is better known as the little brown bat. It is the only bat that resides in both Southeast and Interior Alaska. (Photo courtesy of Alaska Department of Fish and Game)

Since 2014, the state has recruited citizen scientists to monitor bats in Southeast Alaska. Volunteers use recording devices to pick up bats’ high-pitched sounds, used for echolocation. KSTK’s June Leffler spoke with the Alaska Department of Fish and Game about the data collection.

White nose syndrome is a fungal disease that is killing off bats on the U.S. East Coast. While it hasn’t hit Alaska yet, it is one of the main reasons bat research has revved up in the past decade.

With that newfound interest, new discoveries are being made in Alaska. Last summer, the state recorded the first documentation of swarming behavior outside of a cave or mine. Here’s Fish and Game Wildlife Biologist Tory Rhoads.

“Completely by accident got footage of this, which is a behavior that’s this circling outside of known roosts that’s believed to be associated with mating and showing juveniles to the hibernation spot.”

Learning more about bats hibernation locales and patterns is Rhoads’ top interest. And volunteer scientists in Southeast can add to biologists’ research.

“We got so much enthusiasm the first couple of years that what was initially going to be a short-term study has just changed over time. And now we’re been able to pursue other unquestioned answers out of it.”

The state operates stationary monitors that collect bat sounds daily. Wrangell has one at its golf course. But volunteers are tasked with something totally different.

They strap a recording device to their car, then drive along the highways and dirt roads picking up bat sounds.

“In the passive monitors you can have one bat just circling, calling all night and so you’ll get a thousand calls but have no idea how many bats there were.”

But volunteers gather data that can tell the number of flying mammals.

The data also tells biologists the different species and their locations. Biologists can use this to figure out which habitats bats prefer.

“Whether it’s weather, moonlight, or productive old growth forest, or open muskeg, or proximity to fresh water, elevation, you name it.”

Having a better understanding of those habitats means biologists know where to go to collect even more data. They set up cameras and thermal detectors in areas of interest, which lead to the swarming discovery.

Rhoads wants volunteers out in certain times to figure out where resident bats are hibernating. For a four-week period in the spring, bats are emerging from their dens. In the fall, they go back to them.

Wrangell will receive one device for volunteers to check out on a weekly basis.

Southeast has more bat diversity compared to the interior. Six species have been detected in Wrangell and seven in Ketchikan. While only one, the ubiquitous little brown bat, resides up north.