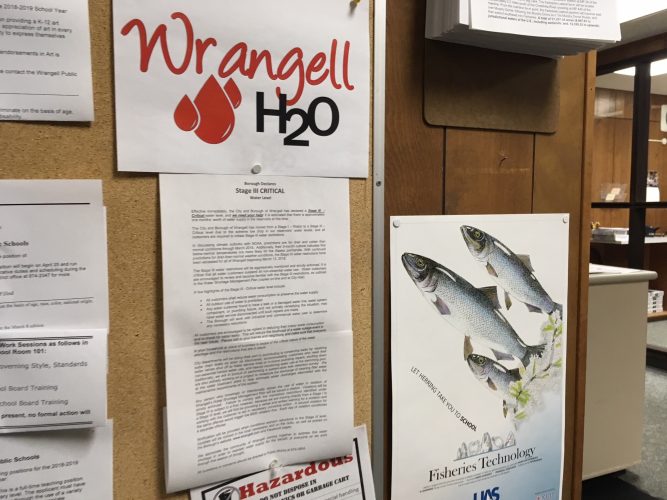 The City of Wrangell declared a red alert water watch in March of 2018. (KSTK)

After a lot of talking about installing a new plant, the assembly unanimously agreed now is the time to go forward.

“We’ve been doing this for two and a half years. I’m sorry, I don’t want to wait,” said Assembly Member David Powell. “We owe it to the people of town and the canneries and other people working in this community to know what we are going to do here.”

The city approved a dissolved air floatation system. Wayne McHolland is the lead technician at the current plant. He says the new plant will be an upgrade in a number of ways. It’s almost two times faster and would have more storage.

The city has struggled with meeting water demands for years. In 2016, the city declared a water emergency. That forced a sea food processor to leave town and halted water sales to cruise ships. And just last week, the city declared an emergency water watch, because of a lack of rainfall.

Assembly members and city staff weighed their options during a three-hour meeting. Assembly members were concerned about the $9 million price tag. Federal monies would pay most of the cost, about half in grants and half in loans. That would cost the city $175,000 a year for 40 years.

But Wrangell’s water issues are so much bigger than biting the bullet and replacing an old plant. Lisa Von Bargen is the city manager.

“I think there’s no doubt that better a production alternative is the best thing we could do. But, we have issues from reservoirs to distribution system,” Von Bargen said. “Can the water fund and our rate payers afford what we are going to have to charge just to bring our water system up to where it needs to be?” 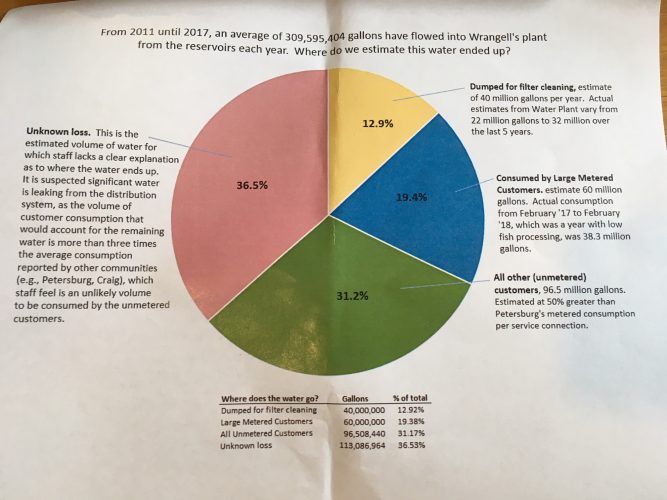 (Courtesy of the City of Wrangell)

City officials say that a third of the town’s water is lost before it even reaches people’s taps, most likely from plumbing leaks.

“Do we really have a production problem or are we wasting more water than we need to and that’s not really how much water Wrangell needs to use?” Von Bargen said.

Von Bargen presented conservation efforts. Those include fixing leaks, metering and upgrading the dam and reservoirs.

Assembly member Steve Prysunka pushed to focus on those measures.

“We can put in this new plant that has cost savings and be running water through like demons. But, if we don’t have water to put through our new shiny plant, we are really in trouble,” he said.

McHolland gave his final word to the assembly.

“Even if there are no leaks and everything was accounted for, this water plant will never, ever supply water fast enough to supply any amount of infrastructure,” he said.

The assembly ultimately agreed that a new plant is necessary.

It will take three years for the plant to be fully installed. In the meantime, the city is replacing the current plant’s filters, which will cost $500,000.