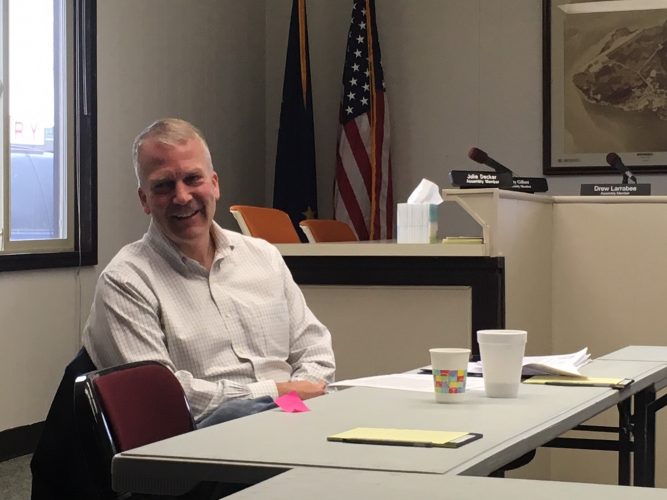 U.S. Sen. Dan Sullivan spoke about the federal budget and his legislative priorities at a public meeting Friday in Wrangell. Sullivan voted against the $1.3 trillion federal budget in March, saying legislators did not have enough time to know what they were voting on.

The budget did pass, and it does have funding for Alaska that President Donald Trump did not include in his original proposal. This includes $30 million for the Denali Commission, which would go to rural infrastructure projects. Plus, two years of funding for the Secure Rural Schools program, which funnels money into rural communities and schools affected by declining timber revenues.

“I advocated almost every day for the last over a year with the leadership and Mitch McConnell for Secure Rural Schools,” Sullivan says.

Sullivan says his upcoming priorities include cutting red tape where possible. He wants to reduce restrictions on permitting for infrastructure and resource development projects, saying the National Environmental Policy Act needs an update.

“It takes seven years to permit a bridge in America, I mean what the heck, right? I think Alaska has been a huge, unfortunately, recipient of a lot of those delays, delays, delays in federal permitting,” Sullivan says.

City Manager Lisa Von Bargen says Wrangell is feeling the impact of limited and delayed forest harvests. She was glad to see the budget includes a survey of harvestable young growth timber that could impact the Tongass.

“Having the ability to ahead of time identify areas that can be opened up when the market is ready to go rather than having to go through a 10-year public process is a must, we just can’t go through this,” Von Bargen says.

She says the city will also be applying for federal funding for water production and other infrastructure projects. Sullivan says, when other Alaska communities aren’t competing for the same funds, he would be happy to write letters in support of Wrangell’s goals.

Both the Senate and the House reconvene Tuesday, April 10.