Could hagfish provide another fishery for Southeast? 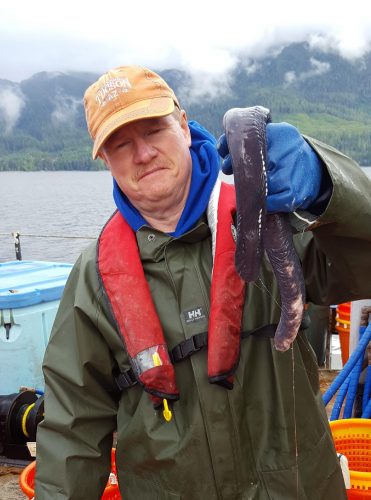 Scott Walker is thrilled to catch hagfish. (courtesy of ADF&G)

An awkward creature lurks in Southeast Alaska waters: the hagfish. It looks like an eel and produces loads of thick slime. Fishermen commonly avoid this critter. But the Alaska Department of Fish and Game is researching the potential for a hagfish fishery, saying the bottom-dweller has plenty of market value.

The market for hagfish is mostly overseas. Koreans eat these worm shaped fish, stir-fried or barbecued. And its skin is used as leather for making purses and wallets.

“If you see any products that are called ‘eel-skin’ it’s most likely hagfish.”

Andrew Olson studies groundfish in Southeast Alaska for Fish and Game. He’s researching where and how plentiful hagfish are.

He says the hagfish is limited to pockets in Southern Southeast waters, near Wrangell and Prince of Whales Island.  Fish and Game set a guideline harvest limit of 60,000 pounds. And they’ve just about reached that in a year.

That number is nothing compared to hagfisheries in Washington, Oregon and California, which have million-pound harvest limits. But, it could provide a supplemental fishery at about a $1.25 a pound.

One factor that might deter fishermen is the thick, gelatinous goo.

“If you recall, I don’t know if they still manufacture it, but the slime in a can for kids to play with. It’s that consistency”

As a defense mechanism, hagfish secrete proteins that, when combined with water turn into slime. And it can expand 10,000 times its initial volume.

“The difference between a slimy halibut and a slimy hagfish. A halibut might be slimy on the outside a little bit, but an individual hagfish will make buckets of slime.”

Fishermen don’t want to deal with that. But, the substance is something special. It’s malleable and super strong.

“In medical research their using it to treat burns. it seems to be really good for your skin apparently.”

The U.S. Navy is synthesizing a material inspired by the slime to make Kevlar-like body amour.

“There’s definitely I think in the future going to be an expansion of that end of the market beyond leather and food.”

A handful of exploratory fishermen are testing the waters. Fish and Game will continue this research for a few more years. And If the population is there, Fish and Game could manage a commercial to keep it sustainable for the hagfish’s growing market.