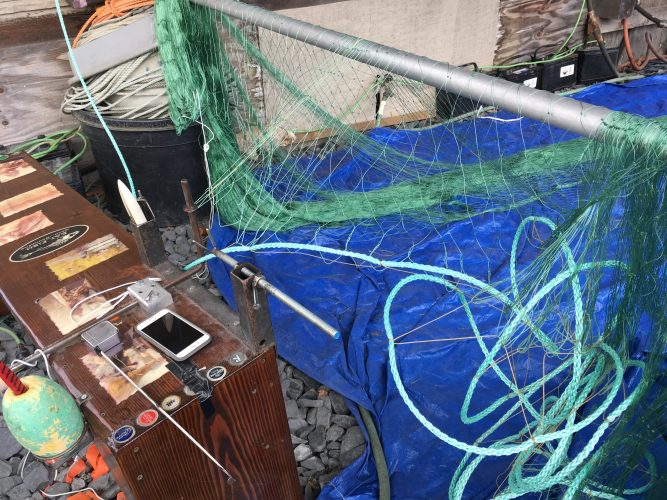 Fishermen in Wrangell can properly dispose of gillnets they no longer want. The environmental arm of Wrangell’s local tribe is collecting and recycling this waste.

The gillnet disposal program is in its fourth year. And 10,000 pounds was collected through the program last year.

The tribe decided to step in when it realized the problem this waste was causing the city.

“Because it was a problem for both Public Works and Harbors, because nets would end up in the water or they would end up in the dumpsters, which can cause problems with the equipment,” said Chris Hatton,the IGAP coordinator for the Wrangell Cooperative Association.

Of course, these nets cause environmental hazards as well. In oceans, fish, seals and other creatures get entangled in the abandoned gillnets. Predators will also get caught going after wildlife stuck in the nets.

“[The nets] ghost fish… and it becomes a giant mess of nastiness floating in the water,” said Kim Wickman of the IGAP department.

Wickman said these nets can cause the same problem when disposed of on-land, affecting porcupines, deer and other animals.

Wickman said the waste will be transported to a recycling company in Burlington, Washington. The waste can eventually be made into all kinds of things: floor tiling, even shoes and skateboard decks.

“There is a lot of uses once the stuff’s been melted down. And it’s kind of neat if you get really bored and want to Google it,” Wickman said. “The skateboard decks are beautiful and the shoes and very cute.”

But, funding for program is expected to end in 2020. At that point the tribe won’t be able to hire folks to process and transport the material.

The Indian General Assistance Program is funded by the federal Environmental Protection Agency. While IGAP funding is stable, says Hatton, the EPA has urged tribal groups to find other monies for solid waste removal programs.

“We’ll always be able to do outreach and education,” Hatton said. “But we won’t be able to have dollars spent on hands-on solid waste activities. Like this, or our collection of e-waste, that sort of stuff, because it might go away in 2020.”

The local IGAP department has hired a small crew to process the waste this summer. Fishermen can dispose gillnet filament anytime of the year. Now is a good time to do that, since fishing seasons are underway and coming up.

Fishermen can dispose of their gillnet filament at Trident’s cold storage in the boatyard. Please put nets in the salt bags and strip the lead line out. You can see the disposal site from the south end of Front Street behind the chain-link fence.