Spike in shipping costs has Southeast businesses up in arms 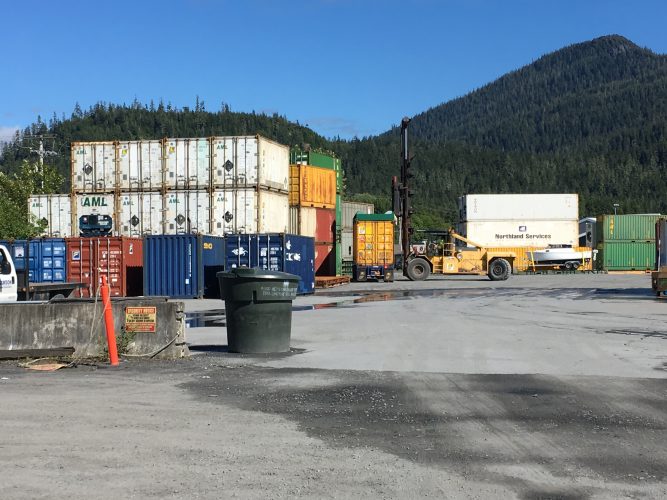 Lisa Messmer works for a furniture store in the small island town of Wrangell. Earlier this year, she received an email with the heading: freight rate increases.

“When I saw the heading I didn’t read the rest of it because we don’t have a choice here,” Messmer said. “You can’t call them up and say you aren’t going to pay. We’re just stuck, and we pay what they say we pay.”

Wrangell and the rest of Southeast Alaska receive groceries, hardware, appliances, and alcohol by seafaring barges coming from the Seattle. It’s really the only way things get to small island towns.

Freight rates increase all the time. And at small increments, people just suck it up. But small business owners are seeing a steeper hike than anyone expected.

He sells boats, motors, buoys, and anything else for the water. He anticipates raising his prices to meet the extra freight costs.

A bar owner asked to remain anonymous, fearing his comments could impact his contract with his shipper. His liquor freight increase 58 percent this year, and he had to make a tough decision after seeing that increase.

“Our prices went up the day after I got that invoice,” he said.

There are only two barge companies operating in Southeast: Alaska Marine Lines and Samson Tug and Barge.

Samson’s Vice President Jerry Morgan says the rates have increased to meet their own operating costs. He says when Samson got into the Southeast market five years ago, its competitors were setting low rates for the area.

“I don’t know why the rates were so low, but they were so out of market range it just doesn’t make sense to even provide service to Wrangell at the rates they were offering before,” Morgan says. “The rates in Southeast are pretty low across the board it’s just a difficult market to compete in.”

It’s difficult to peg one number for overall freight increases. Freight rates are based on different weight loads, commodities and ports. Plus, individual businesses have their own contracts with these freight companies, which all look a little different. But companies regularly submit to the federal government their tariffs, which are a baseline of their rates. Here are some of the rate changes for Samson from 2017 to 2018 in Wrangell (at minimum weight loads). Groceries went up 7 percent, building supplies went up 13 percent, liquor went up 80 percent, and mixed freight loads went up 35 percent. Gas went down 8 percent.

Alaska Marine Lines is the bigger barge company in Southeast. An AML representative said its rates are also going up, particularly for smaller loads.

The representative says handling 20 to 30 different orders in a single container requires much more handling than unloading a container for a single customer. And AML has jacked up their rates to reflect that internal cost.