Bearfest 2018 kicking off this week 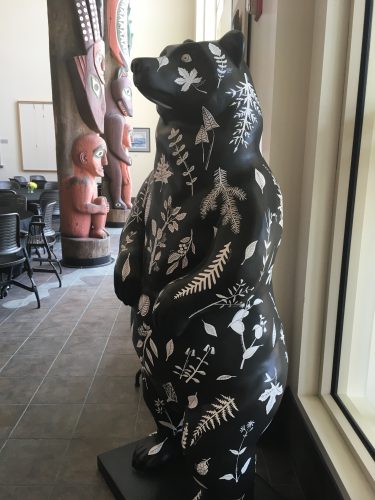 Wrangell is kicking off its annual Bearfest celebration tomorrow.

Of course, the focus is on bears. Ettefagh spends a lot of time with these critters. She owns Alaska Vistas which provides tours to the Anan Bear Observatory. It’s a gem of Wrangell just south of the island, featuring a trail that gets you super close to bears, like too close for comfort.

Ettefagh says that’s why the fest is hosting a bear safety workshop that’s geared towards the Anan experience.

“Focusing a little bit more on real scenarios of things that are going on. For example today at Anan, I just got back, one of the brown bears is starting to feel his oats. He tried to bluff charge Robert. So Robert had to basically what we call teach the bear. So he didn’t spray him but it was a little bit closer. And as more people go down to Anan we want them to be aware of what some of the consequences are of the actions people take,” she says.

The course is taught by retired Alaska Fish and Game wildlife biologist Robert Johnson from Yakutat. Police Chief Doug McCloskey will follow up with a gun safety workshop.

“I think people are going to find that this is going to be a better learning experience than it’s been the last few years,” Ettefagh says.

The featured artist is Michael Bania. She is a children’s book illustrator who spent much of her life teaching in interior Alaska. She designed the Bearfest t-shirts this year and will host an art workshop.

Bearfest is one of the few events that brings live music to town. Matt Koerner played a solo set last year in Wrangell. He’s performing with his band this time for Bearfest. There will be a family friendly show at the Nolan Center Friday, and then another at the Totem Bar Saturday night.

The smoked salmon contest is a new addition to the festival this year. Everyone is encouraged to bring their best version of the treat. The winner will win $100.

“We’ll ask people, you know, we don’t expect your total secret recipe but just to have a discussion about how you smoke salmon,” Ettefagh says.

While the fest brings in visitors, Ettefagh considers this fest a public service to people of all income levels in the community. Even the Stikine Inn salmon bake dinner asks for a pay what you can afford donation, rather than a standard plate cost.

“We’ve tried to make it so that nothing has a fee therefore all the people that generally can’t afford to go to these things can go,” she says.

The festival lasts from July 25th through the 29th. A schedule of events is available at alaskabearfest.org