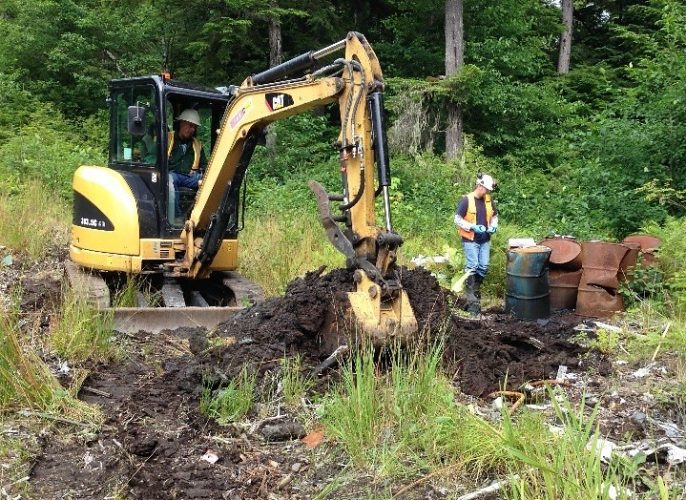 A backhoe digs up part of the old Byford Junkyard in Wrangell. After removing old cars, oil drums and other trash, the state is treating and moving contaminated soil to a rock quarry south of town. (Photo courtesy Department of Environmental Conservation)

A new concern around the Byford Junkyard was raised at last night’s Wrangell Borough Assembly meeting. A resident believes some of her health problems may be a result from living near the junkyard for years.

Lavern Lawrence asked the assembly last night to pay for some of her medical expenses. She says she and her husband are experiencing health problems that her doctors cannot account for. She says doctors are recommending she get a toxicology report to see if living near the old junkyard is behind her problems.

Lawrence says the cost for the testing is $1600 for both her and her husband. Lawrence lives on 4.2 mile Zimovia Highway, near the junkyard site. Lawrence did not say what her health issues are.

The junkyard housed old cars for decades. Car batteries leaked into the soil. The state pledged to cleanup the lead contaminated site, first by treating the soil and then transporting it. The state has allocated $19 million total to the project to ship the waste to a landfill in Oregon.

Lawrence noted that the city has not taken on that kind of financial burden to clean up the site.

“I don’t think it’s a wild request,” Lawrence says. “I think maybe it’s a little it of a responsibility on the city.”