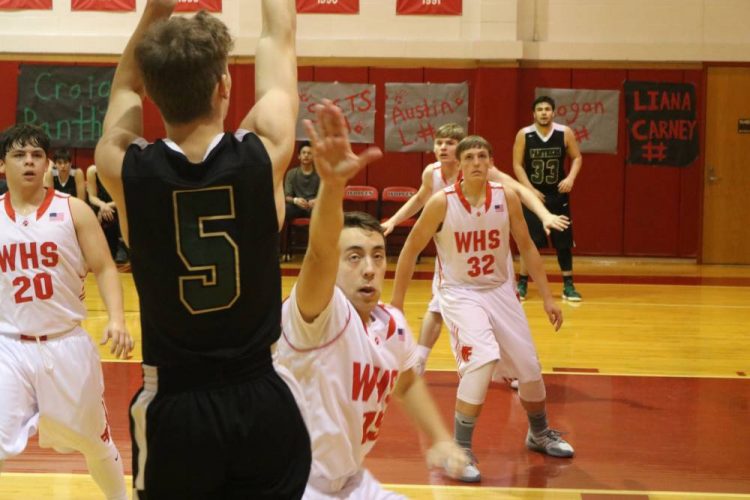 Wrangell Wolves kicked off their conference season last weekend. Varsity boys and girls won both of their games against the Craig Panthers.

Coach Cody Angerman says there’s still a lot of work to be done this season.

“We could rebound a little bit better. There’s going to be nights where we just don’t shoot the ball well, and that’s just the way basketball goes, but for us it’s just about finding those things we can do when we’re not shooting the ball well,” Angerman says.

He also says his boys have had rough second halves. And he wants to see that change, so that they can take a strong lead, keep it and get to play more of their guys. Something they pulled off Saturday.

Tasha Massin and the rest of the pep band cheer on the wolves during game time. (Laura Helgeson/ KSTK)

“It’s nice to get everyone on the court. That’s kind of the goal here. We want to give everyone a little bit of playing time and we kind of had the opportunity to do that,” Angerman says.

The Lady Wolves won Friday 57 to 47 and Saturday 61 to 40. They came out with a ton of energy, something Coach Laurie Brown says can get them in trouble. Fouling was an issue Friday, but she says they got it together by Saturday.

“Tonight was definitely a much better game,” Brown says. “We contained our fouls, we pulled down the rebounds. We just played with much more composure.”

What is she working on this season?

“They sometimes doubt themselves, just learning to play with confidence,” she says. “Some of them are really young and some of them are seniors, so just getting them to work together is what’s important.”

Next weekend the wolves play the Haines Glacier Bears.